As one of the primary foods in the aquatic food chain, Bloodworms are a type of larvae, and refer to a few different types of worms.

The two most popular types for feeding fish are:

In this guide we are going to cover everything related to bloodworms including, the types of bloodworm, what kind of fish can you feed them too?, how to breed bloodworms?, plus much more.

Bloodworms are a type of larvae and one of the most popular foods worldwide for freshwater fish. It is also used to feed other aquatic animals such as crabs, shrimp, snails, salamanders, and turtles as they are a great source of protein.

They are generally farmed around the north east coast of America and are very popular as fishing bait.

As well as food, bloodworms can also be used to resolve constipation in fancy goldfish. Too much dried food causes this constipation and one of the best solutions is to feed them bloodworms.

Why Are Bloodworms A good Choice?

Believe it or not, fish can actually be very picky eaters. If you’ve tried a number of options but your fish are still not eating, try using bloodworms. It’s said that 99% of fish will eat bloodworm if you offer it to them.

They are ideal for picky eaters, contain plenty of protein, and are fairly inexpensive. This means your fish will get all of the nutrition they require.

In this section we are going to give you information on the different types of bloodworm.

As you’ve probably figured from the name, live bloodworms are actually alive, and are a popular choice amongst fish keepers as it’s a more natural way of feeding.

Due to convenience, frozen bloodworms are probably the most popular type amongst fish keepers. Let’s take a look at the pro’s and con’s. 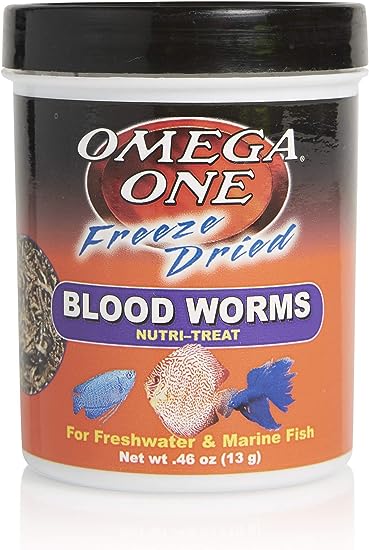 Let’s take a closer look at the pros and cons of freeze dried bloodworms which is another popular and convenient type.

What Fish Can Eat Bloodworms?

Other than strict herbivores, almost any type of freshwater and saltwater fish will eat bloodworms. Let’s take a look at just some of the types:

How Often Should You Feed Your Fish Bloodworms?

As overfeeding your fish with bloodworms can lead to constipation, it’s a good idea to feed them just once or twice a week. You can vary their diet with other kinds of fish food.

You may be under the impression that breeding bloodworms is more convenient and cheaper than buying them but this is not the case.

It’s actually very difficult to breed bloodworms as the flies are lay eggs elsewhere because they are prone to keep flying away. Breeders usually have a designated space to keep them to prevent them flying.

For hobbyists or people just starting out, we recommend just buying them instead of breeding. If you do want to breed bloodworms, you can check out this step-by-step guide.

When it comes to bloodworms, this is just one stage in the life cycle of non-biting Midge fly. Let’s take a look at all of the stages.

What are bloodworms good for?

Bloodworms are used to feed fish as they are packed with proteins and iron. They are a great choice because pretty much most fish seem to like them.

Due to their name, most people think that bloodworms eat blood but this is incorrect. They get their name not because they eat blood, but because of their color.

Are bloodworms dangerous to humans?

Bloodworms do not posses any great danger to humans. The worst that can happen is a bite that produces a similar reaction and sensation to that of a bee sting.

So that’s everything you need to know about bloodworms. Remember that it easier to purchase them than to breed them yourself. They are also a great choice for pretty much all fish breeds.

A Guide on the Oscar Fish

6 Signs That Your Fish is Happy in a New Tank

How to Breed A Neon Tetra?