Why You Should Stop Tapping on Fish Tanks

Fish have been a popular pet for many years with most people not giving much thought to their wellbeing.

Tap tap tap. It’s the sound of your finger hitting the glass. Many people tap on the glass of the tank, thinking it will provide a fun experience for both them and the fish.

But did you know that tapping on a fish tank has many negative effects?

It doesn’t seem like much but tapping on fish tanks creates sound waves through water that can be heard by the fish inside.

this could create a lot of stress for our underwater friends! So what should we do instead?

This blog post will cover why you should stop tapping on fish tanks.

We will also look at alternative ways to get your fishes attention without having to use your fingers or voice, how tapping on a fish tank creates sound through water, if fish have ears, what effects stress has on your fish and more!

Reasons Why You Should Stop Tapping on Fish Tanks

Tapping on the glass can create a lot of stress for our underwater friends and if done constantly could lead to long-term damage.

If you’re having trouble getting your fish’s attention, there are many other ways we will cover in this post so keep reading!

Here’s why you should stop tapping on fish tanks.

Tapping On The Glass Disorients Fish

Sudden noises can disorient a fish who will have no idea what’s going on. Imagine

If a big truck was driving by your house very loudly, you would likely be startled and have to take cover.

That’s how fish feel when we tap on the tank glass, they are confused about what is going on so it’s best not to do this at all!

A disoriented fish is going to swim away and go into hiding. This is the last thing you want because you will miss all of their beauty.

Fish hear very well and they can actually differentiate sounds of different frequencies.

This means that just like people, some fish have better hearing than others. Some species are less sensitive to sound than other more noisier species such as Goldfish or Guppies.

Although fish generally have no external ears, their internal ones are highly efficient.

When you combine this with the fact that sound waves travel five times faster through water than it does through air, you can see why tapping on the glass will startle your fish.

Even a mild tap on the side of a fish tank will be magnified underwater and sound considerably louder.

These vibrations are not only picked up by their eardrums, but also their whole body.

This means you should not create new noises through water by tapping on the tank, as this could trigger a panic response.

Tapping Could Injure a Fish And Cause Illness

While it may not be obvious to you, tapping on the tank could actually injure your fish.

When a fish is startled their instinct tells them to swim away from the noise and hide in a safe location such as among rocks or plants.

As they slam into objects at high speeds, this can cause damage to gills and fins if they are too close to the glass without enough water flow around them.

Stress Causes Fish Disease And Death As well as causing physical injury, loud noises like tapping will trigger stress responses in fishes that can lead directly to disease and death over time.

The immune system gets suppressed due- chemical changes within an animal’s body when exposed to fear/stress; which makes animals more susceptible for illness & infection.

Do Fish have Ears?

When it comes to hearing, fish possess unique organs that differ from human ears.

Fish have a lateral line system that runs along both sides of their bodies. The aquatic creatures are extremely sensitive to pressure differences in the surrounding water, which is how they can detect sound waves travelling through it.

Hearing organs do exist within fish species and these include: A swim bladder (air filled sac) located near its tail and connected via a small channel to an opening on top of its head; called the operculum — this functions like our eardrums; specialised bones beneath each eye- these function as an inner ear; and tiny hairs cells with nerve endings inside their bodies—in sharks, these form part of the ampullae de Lorenzini (specialised pores on snouts).

How to Get your Fish’s Attention without Tapping

Instead of tapping on the glass, here are some alternative thing’s you can do if you want to get the attention of your fish.

The easiest way to get your fish’s attention without tapping is by using an air bubbler. 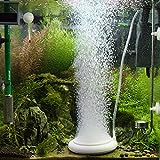 The bubbling water will create a current in the tank which will attract their attention, and they’ll come looking for food because this means there are particles of food floating around in the water that you can use as bait!

Food can tempt fish out of hiding and get them to come out and play.

You can use a syringe (without needle) or any small container with holes in the lid, such as an old mayo jar, filled with some of your fish’s favorite foods like shrimp pellets or blood worms under the surface of the water for them to find on their own.

As well as these two tricks, here are a couple of other thing’s to consider:

Your fish may be hiding due to their tank mates giving them a hard time and being overly aggressive.

If this is the case then you may consider more suitable tank mates that are peaceful and less aggressive.

Some fish, for example are nocturnal, which means they will only become active at night.

There is a solution to this in the form of lights that mimic natural day and night cycles. This means you will be able to view your fish without resorting to tapping on the glass.

Why you should stop tapping on fish tanks. We hope you’ve learned why tapping on the glass is bad for fish, and how to get your fish’s attention without having to tap.

Remember that just because this may seem like a harmless act of curiosity doesn’t mean it isn’t causing harm.

If you have and questions or thoughts about what we’ve discussed today, leave them in the comments section below.