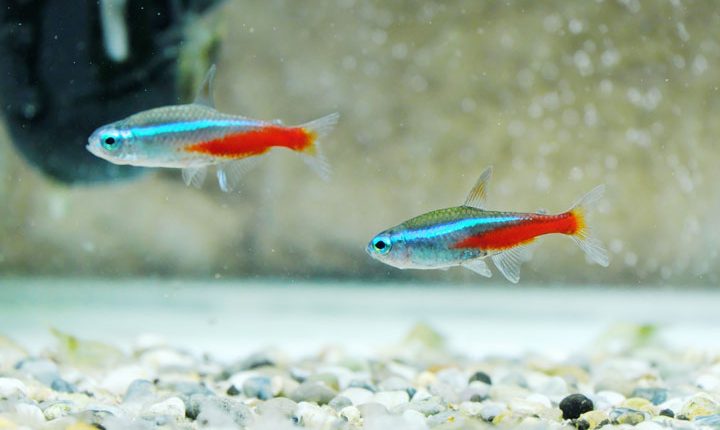 Some fish species are popular for nipping on the fins of their tankmates making them look untidy. Now, you’re wondering if the beautiful neon tetras you’re about to purchase will do the same.

Observation of Neon tetras shows that these aquarium fish are fin nippers. Yes, you could easily think otherwise considering their fragile appearance. But, they pursue each other in the same tank nipping at their fins. This they also do to other tank mates you keep in the same tank with them.

A Tetra species known for its aggressive nature and fin nipping culture. Except you just want to experiment and see for yourself, it is not advisable to keep the Black skirt tetra in the same tank with other fish species. The outcome is simply giving the black skirt tetra license to nip fins.

Being infamous for fin nipping, Serpae Tetra is the species of Tetra fish that will violently chase around each other and tank mates especially. The only way to stop them from doing so is by keeping them in separate tanks. Serpae Tetras will actively pursue other fish in the same tank nipping at their fins.

This species of tetras are another popular fin nippers. It’s usually like they choose when to do so or not. This is because at this time, they are in peace with other tank mates and at another time, they are already chasing and nipping fins. It is only advisable that you do not keep so many of them in a school, so that you can keep them in check. If not, the Emperor Tetra species will nip at the fins of their tank mates and each other when they don’t get enough space.

Are All Tetras Fin Nippers?

No, not all Tetra species are fin nippers, studies have shown that the undermentioned tetras are not fin nippers.

This is also a very peaceful tetra and a good tank mate for a lot of fish species. Rummy Nose Tetras have excellent behavior and so do not nip the fin of other fishes. Fish keepers who need a peaceful tank would love this Tetra species.

Yet another peaceful tetra species. Owing to their nature, they can be school together with Betta splendens. This tetra species are not fin nippers. They easily get along with most fish species and are not aggressive.

This species of tetra are naturally calm and wouldn’t trouble others. Close observation shows that they don’t portray any form of aggression and so are not fin nippers. You can easily school them with most freshwater fish.

Why Would a Fish Nip the Fins of Others?

Some fish species are fin nippers out of the mere assumption that the fins of other fish are food. Secondly, they could also nip the fin of a fish that enters their territory. Each fish has its territory and when one crosses over to another, neon tetras could easily nip their fin.

What Damage would a Victim Fish Sustain from Fin Nipping?

You may not at an instant notice the damage caused to the fish victim of fin nipping. However, be rest assured that it is a gradual process that could eventually lead to the death of the fish. The fish might feel stressed from continuous nipping over time.

To help a fish with nipped fins, apply melafix (API) and stress coat. These products are available on Amazon and will help contain the stress. Like any other mammal and living thing, fish feel pain and continuous pain will undoubtedly lead to their death.

How Do You Recognize Fin Nippings?

If you take a close look at your fish and notice simple pinches on the fins, that’s fin nipping. Do not expect any discoloration as a result of fin nipping. When too much, fin nipping will make the fins of your pet fish appear tattered.

Sometimes, when it has got to fin rot, you may notice white coloration along fin edges. on the other hand, if the fins turn black, it could be ammonia poisoning an infection caused by bacteria. Also, look out for red streaks which can affect fish.

Will the Fish Fins Recover from Nipping?

Like any other living thing that has the ability to regenerate and heal. The neon tetra can also heal. But this process takes time. The neon tetra can easily regrow its fin to the original state. However, the fins must be treated without delay so that the fins are not completely eaten away. It takes about 4 to 6 weeks for a fish to recover from the damages of fin nipping.

What Does Fin Nipping Lead To? And How Serious Is It?

This could lead to the death of the fish at some point if it gets extreme. Owing to the fact that the fish becomes stressed from the continuous pain which they feel from fin nipping. Fin nipping is as good as harassment and of course, the outcome is usually not good. It could be helpful to separate the fin nipping neon tetra from the peaceful quiet fish. It is normal for one fish to feel dominant and try to bully others. So, the best option is to have a big tank.

These creatures react based on their instincts and can get aggressive due to the environment. Tough conditions such as a shortage of food can bring about fin nipping. The neon tetra is particularly aggressive while they feed and try to protect their territories. Even though the neon tetra looks very peaceful and colorful, it doesn’t rule out the fact that they actually claim territory.

What Is the Best Tank to Keep the Neon Tetra to Avoid Nipping?

You can reduce the chances of a neon tetra to nip fin by being mindful of the tank or aquarium that you put them into. The neon tetra loves to swim freely and so will require a big tank that can hold at least 10 gallons of water.

This tank can contain 4-6 neon tetra. If the number you keep in this tank increases, it can easily lead to fin nipping. This is because the fish starts getting uncomfortable which then makes them very aggressive most times. So, a 30-gallon tank would be an excellent choice to decrease the chance of nipping. It is believed that the neon tetras are not actually fin nippers. But can carry out this activity once they feel threatened in any way and can act as an act of defense.

Neon tetras are very active, playful, and tricky fish species. Seeing them pursue each other in their tank almost all the time will make you wonder if they are actually playing or Fighting. When they are in a small container, it usually results in fighting for space because they don’t get enough room for free movement.

How Do I Know If My Neon Tetras are Mating or Fighting?

As Neon Tetras mate, they appear violent which can make you think that they are in a fight. During mating season, you will find the male tetras fight amongst themselves in other to choose a mate for a female tetra.

To ascertain that your neon tetras are actually mating, you can isolate a female and male tetra in another tank with optimal mating and spawning conditions. The male will act in a rather odd manner swimming in square pattern when it is time to mate. Then look out for the males fertilizing the eggs.

What Can I Do to Stop My Neon Tetras from Fighting?

The neon tetra does not condole continuous bullying by larger fishes. It’s important to separate them and put them in a different aquarium once noticed. They are also very sensitive fish and can sense a very slight adjustment in their environment which can make them act out of normal. They may end up stressed and fail to eat normally which in turn makes them quiet and less active. If they do not get rapid response, this condition will lead ultimately to their death.

What Happens when Your Neon Tetras are Bullied?

Observing your neon tetra lose its bright coloration it could possibly be a case of bullying. Again, check if it isolates itself from the school and swims alone. The best thing to do is to identify the bully and take it out of the aquarium to a separate tank.

What Can Be Done to Prevent Fin Nipping?

With the above-mentioned interventions, you can keep fin nipping in check in your aquarium. In a case where there is fin nipping afterward, follow these follow up instructions: