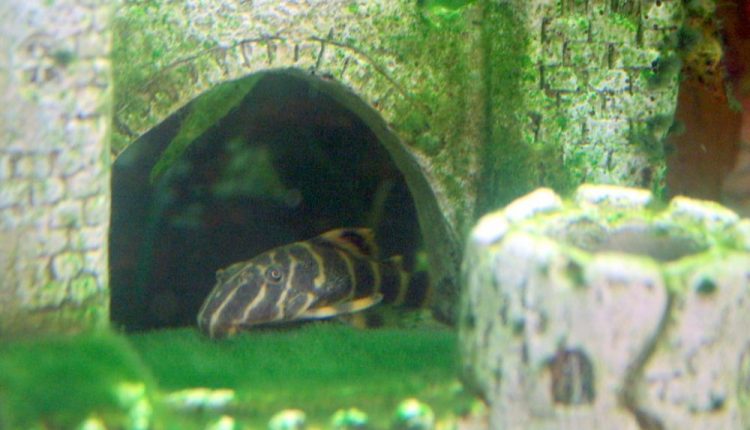 The Clown Pleco, also called the Clown Panaque or Ringlet Pleco is a species of small striped catfish with the scientific name Panaqolus maccus.

They are extremely popular freshwater aquarium fish because they are hardy and adapt well to aquarium life, and are peaceful tank mates who are easy to breed.

They have distinctive striped patterning that serves as camouflage in their native riverbanks but makes them attractive and interesting in an aquarium.

Because they are low-maintenance and tolerant fish, they are suitable for less experienced aquarists and add color and interest to the bottom of a freshwater tank.

Panaqolus have a standard catfish shape, with a suckermouth on the bottom. They are usually sold as juveniles, about 2-inches in length, and mature into 3-4 inches long as adults.

They have a dark brown or black base color, with bright bands or vertical stripes of white to bright orange or yellow. Juveniles are usually more brightly colored than adults, and plecos will also lose color when stressed or unwell.

Clown Plecos can live for 10-12 years in a quality aquarium environment. Poor water quality and poor diet will negatively affect their lifespan.

Clown Plecos are nocturnal and can be shy, spending their days hiding in rocky caves and root tangles.

They are peaceful and mellow tankmates, although males can be territorial with each other. If you are keeping multiple males, ensure that your aquarium is large enough to prevent conflict.

They may take advantage of an opportunity to eat fish fry and small invertebrates and may snack on vegetation, but they are not active hunters and don’t eat live plants.

In their native habitat, Clown Plecos eat driftwood, and it is critical to keep driftwood in your tank for them.

Clown Plecos do not eat living plants, but old waterlogged wood is home to various fungi, algae, and bacteria, as well as biofilm, and all of these provide a healthy and balanced diet for a Clown Pleco.

However, they cannot survive on algae and biofilm alone, even in an established tank. Besides eating wood, biofilm, and algae, Clown Plecos also benefit from a daily addition of boiled or steamed vegetables, such as spinach or squash.

Feed a Clown Pleco daily, at sunset or in the evening when you shut your lights off, to complement their nocturnal habits. Offer alternating prepared foods like sinking algae wafers or spirulina flakes. Two or three times a week, feed them a protein-rich snack like bloodworms or daphnia. Clown Plecos are easy to breed in an aquarium. Females are larger than males and have a rounder body shape when viewed from above. The males are smaller, with a leaner body.

To breed Clown Pecos, set up a breeding aquarium with lots of old driftwood, spawning caves hidden amongst the wood.

A spawning cave should have a narrow entrance, just large enough for the adults to enter and about twice their body length in size. You can use PVC pipe or similar materials to create spawning caves.

In their natural habitat, Clown Plecos breed at the very beginning of the rainy season, so re-creating those conditions in your aquarium can trigger spawning in your fish. To mimic the transition from the dry season to the rainy season, here are the tank specifications:

To simulate the seasonal changes that stimulate spawning, take 2-3 weeks to slowly increase the water temperature  to 85°F and increase the amount of protein in their diet. Then do a water change to soft water at about 70°F. You may need to occasionally repeat this process to trigger spawning.

When Clown Plecos are ready to breed, the female’s body becomes rounder, while the male develops longer ontododes on his head and dorsal fin. The male guards the eggs as they mature and should never be removed from the breeding tank.

The fry are highly susceptible to predation from other tank mates and should be protected until they are large enough to cohabitate with other fish.

Clown Plecos are native to the Apure and Caroni river basins of Venezuela but have been identified in Columbia. They live in driftwood tangles near the bank, with low visibility due to decaying vegetation in the water.

Their freshwater rivers are slightly tannic, with warm, fast-moving water. Still, the water conditions change dramatically based on the season, so they are tolerant of a broader range of conditions.

Clown Plecos are nocturnal, spending most of the day hiding in caves and tangles of roots and foraging by night. You can use food to train plecos into shadier parts of an aquarium by day and overcome some of their natural shyness.

Types of Clown Plecos and Their L-Numbers

There are so many catfish species that aquarists have developed the L-number system to help identify and organize them. L-numbers help identify loricariidae species by common name or descriptors before they are formally identified and given a scientific name.

Some catfish species look very similar to Clown Plecos and are often mislabeled but then mature into much larger fish with different tank requirements.

Using the L-number helps to ensure that you have the desired species of catfish and avoid confusion. Some of the most common Clown Pleco species and L-numbers are:

A single Clown Pleco requires at least a 15-gallon tank, but larger is better. It’s also better to choose a long tank rather than a high one since they are bottom-dwelling fish.

Clown Plecos are wood eaters, so they need a lot of driftwood, sticks, branches, and woody material in the tank. Provide them with options and variety to balance their diet and add rocks to encourage algae and biofilm growth.

Clown Plecos dig in the substrate for hiding and spawning, so it’s best to choose a soft substrate that won’t damage their fins. Aquatic soil or fine sand or gravel are good choices.

Clown Plecos primarily consume fibrous material, so they require a robust filtration system that mechanically and chemically removes waste from the water. Change the water regularly, once a week for a small tank. They also prefer a moderate water flow.

Because they are nocturnal, Clown Plecos will hide from bright lights and prefer shady spots beneath plants or tank décor.

Clown Plecos are attractive fish that make peaceful tank mates and help keep a tank clean by eating algae. They are also tolerant of a wide range of water conditions, hardy and not prone to illness or disease, and easy to feed and care for.

They make a perfect addition to a wide range of aquascapes and add interest and appeal to the home aquarium.