How Do Lobsters Communicate? [8 Shocking Ways] 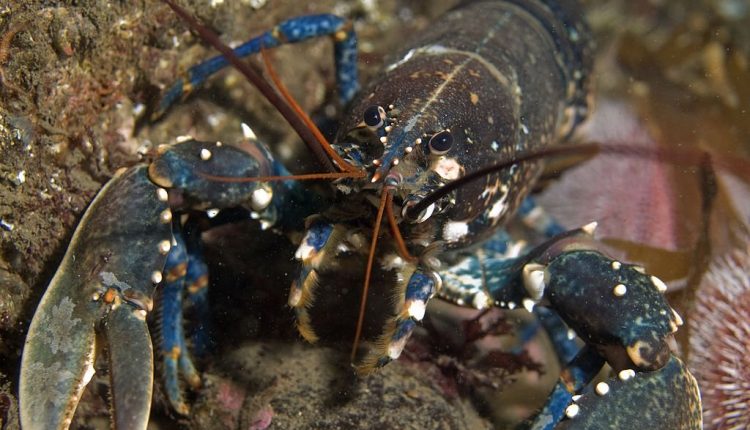 If you have decided to add lobsters to your aquarium, they are sure to fascinate you with their uniqueness every time you look at them. Some regard them as ‘roach of the deep’ and others as ‘knights of the seas’. Except for human hunters, lobsters have almost no predators. As they belong to the Crustaceans group of aquatic animals, their claws, tough shells, and antennas make them look amazingly different from human beings and the aquatic animals they surround themselves with.

But it is human nature that we always look for similarities, and communication is the center of our life, so have you ever been curious about how lobsters communicate with each other?

How Do Lobsters Communicate? – 8 Ways of communication in Lobsters:

Here are some of the ways by which Lobsters communicate with each other.

Among many different languages that lobsters can speak, ‘love’ comes on the top. At least twice a year, a female lobster gets ready and waits in the soft shell state. This is because she has the ability to carry sperms anywhere and reproduce whenever the reproduction is needed. She communicates with male lobsters to convey that she has melted shell and is ready for preparation. This communication is done by releasing pheromones into water. Every able-bodied lobster in that area can notice this scenario. Several male lobsters have a fight while the female waits peacefully,  staying at a distance. Once the strongest Male lobster wins, it signals the female’s body to whisk her away to his cave. They mate there.

We have already mentioned pheromones released by the female lobsters when they are ready to mate. These pheromones have the use of not only protecting the lobsters but also communicating information among lobsters, mostly about the predators. Their bodies are designed in a way that they possess gills below their urinary glands. Lobsters can squirt urine stream many feet away with the help of these gills. Anything that tries to harm or prey on the lobster feels this even at a far enough distance. The squirting pee method also proves to be useful in luring the mate into the cave when she is done with a tiring process of shell melting.

You might have wondered at some point in your life that do lobsters really make music? Well, the answer is ‘not really. There are times when they rub their body structures, mostly antennas, at a fast speed. This speed creates a squeaky noise.

Despite all the studies that have been done, scientists have not yet concluded why they do this. We can assume that they do this when their urinary glands are not working enough to squirt urine. The noise created by antennas rubbing can be heard from quite a distance. It is a mode of communication that can also be used as a predator repellent. However, this noise is unpleasant.

A lot of people come up with this question do lobsters scream? The answer is ‘no, they do not. This is a myth that has been given the hype for many decades that lobsters not only scream but also use this as a form of communication. Now, the question is, where did this myth come from? When we boil or cook lobsters, a high-pitched sound is produced, which is unpleasant and can be heard from a long distance. This is where the myth comes from, and people assume that lobsters can scream.

Remember, screaming comes from vocal cords or lungs, but as we have already mentioned that lobsters have none of them. Rather, they have got tiny holes in their bodies where this noise comes from.

An interesting fact about lobsters is that you will see them doing a dance. This dance is because for many reasons. One of these reasons is defense. They have curly tails, which help them is traveling backward. Lobsters use them as paddles. This paddle helps them fight their enemy without putting their life at any sort of risk.

This is probably one of the most important forms of communication between lobsters conveys. Many people find it super interesting too. Female lobsters are called hens or chickens, as Male lobsters are called cocks. A confident chicken is often called by ‘Cock of the walk.’ We use this particular term for lobsters in the same way. Let’s explain how?

Serotonin is a chemical whose production is stimulated when we are either depressed or confident. They fight throughout their life span. When one of them loses a fight, they make a posture of crunching down. It helps them to communicate with other lobsters. It helps in communication because whenever a lobster comes near, it will understand by its posture that this little one has got attacked. They keep on fighting. When, finally, that lobster wins a fight, it stretches its body. This stretching body form is also used as a form of communication and tells other lobsters that it has won a fight.

Lobsters have only a few ways of communication. They do not have much brain to do so with. Their urinating pheromones present their status of body language. Some parts of their bodies help in conveying information to lobsters themselves from their environment. Their feet and antennas are two parts that function more as communicators. The antenna helps in communicating with predators. Their claws size up, which is a sign that can tell how much they are far from their predator. This helps them in attacking their enemy before it eats them.

Another way by which lobsters trick their predators and communicate with each other is to throw a claw out. They self-amputate in a scenario where they cannot find a way out. It is a form of self-defense and an effective mode of communication too.

They do not do it on a daily basis because once a claw is damaged, it takes years to get regenerated, whereas lobsters need it to capture and crush their food. This part of their body is really important for their survival. Damaging it gives them a long-term disadvantage, so they do not use it for self-defense or communication very often.

How do lobsters breathe?

We mentioned in point 4 that lobsters do not have lungs. You might have wondered during reading how do they breathe, then? If you also have the same question, we have got you covered. Lobsters have gills close to their head, under the carapace. They are adapted to breathing by using these gills. These gills function best in seawater. If they are provided an environment with less liquid, they will probably suffocate because of using oxygen quickly.

Can Lobsters never produce any sound at all?

No, this is not true. Although most of them do not produce sound because of a lack of vocal cords and lungs, there is a European species that can produce sound by quickly rubbing its antenna. The squeaky sound that is produced by rubbing antennas can be heard from a long distance, like two miles away underwater. Despite all the research and studies done, scientists are unable to conclude yet why they produce this sound. We can assume it to be a warning to predators.

Conclusion – How Do Lobsters Communicate?

Summing up the entire discussion in a conclusion that lobsters are one of the fascinating aquatic animals that you can add to your aquarium to make it even more attractive and eye-catching. Although they lack both lungs and vocal cords, they are still one of the best communicators on this planet. They have got an amazing system of hierarchy, and they have mastered it.

So, we can say that from the sea to your dining tables, lobsters are amazing fighters.

How Often Do You Feed a Betta Fish? – You Need to Clarify Right Now