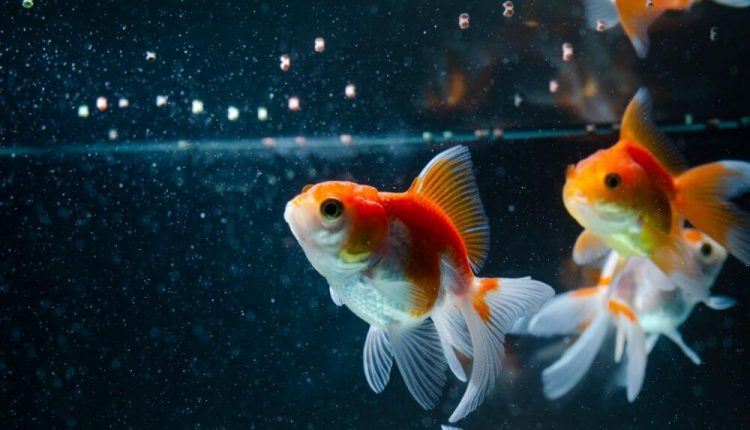 Today’s goldfish are descendants of wild Asian carp selectively bred over centuries to achieve the distinctive orange, yellow, and red hues that we love so much. People began keeping goldfish in indoor fish tanks, where they were less susceptible to predators. They created a vast range of fancy goldfish varieties with different colorations, body shapes, and fin types. There are many goldfish species, but there is an important distinction between the needs and habits of single-fin goldfish and their fancy cousins. So let’s find out what do goldfish eat.

Today’s pet goldfish, as we know them, don’t really exist in the wild. However, in a natural environment, the vivid colors of modern goldfish make them easier for predators to catch.

However, a goldfish’s wild carp ancestors were opportunistic eaters. They eat small crustaceans, insects, and plant matter. In outdoor ponds, goldfish are commonly used to control insect populations because they will eat mosquito larvae and reduce the spread of mosquito-borne diseases.

Generally speaking, even though they eat insects and larvae, goldfish eat a lower protein diet than other scavenger fish.

Goldfish are especially susceptible to overeating. This is because they tend to eat all the food available to them, whether or not they need it. In the wild, this habit helps them survive when they have less to eat, but it can lead to health problems in a fish tank.

What do Common Goldfish Eat?

Because goldfish are such popular pets, there is a vast range of prepared fish foods specially designed to meet their nutritional needs. The most common types of fish food are:

Goldfish flakes float on the surface of the water, where goldfish will nibble at them.

Goldfish sinking pellets. They will eat flakes off the surface of the water, but they are naturally bottom feeders. Sinking pellets are a good choice because they reduce the risk that a goldfish will swallow excess air while they eat.

Goldfish don’t require a large percentage of protein in their diet, but they will love the occasional high protein treat. Treats like bloodworms, brine shrimp, insect larvae, and even small live foods will keep a goldfish happy and restore some of the natural diversity of their diet.

Goldfish will happily snack on small pieces of fruit, vegetables, and leafy greens. Ensure your foods are organic, well-washed, and cut into small pieces to reduce food waste in your aquarium.

Live plants. Live aquarium plants are a healthy addition to a goldfish tank. Goldfish enjoy having plants and décor to explore and hide in, plants generate oxygen and help keep the water balanced, and goldfish will nibble on living plants in their environment.

Some good choices of live plants for goldfish include Elodea canadensis, Anubias, Java moss, and other fast-growing plants.

Feeding a variety of foods from different sources is a great way to protect the health of a goldfish. So even if you choose a high-quality fish food formulated to meet all of their needs, try to enrich their diet with plants, treats, and other ways to add nutritional variety.

What do Fancy Goldfish Eat?

Fancy goldfish have been selectively bred to have different fins and different body shapes that require a bit of extra care in their diet and nutrition. Fancy goldfish need special care when feeding because:

They have short bodies. Their short, rounded bodies have less room for problems with swelling, digestion, or excess air, all of which can press on their swim bladders and cause swim bladder disease.

They have long, fancy fins. Unfortunately, those big gorgeous fins and rounded bodies make fancy goldfish slower and less agile in the water.

When they are tankmates with faster, more agile fish, especially single-finned goldfish who will happy eat everything in the tank, it can be hard for fancy goldfish to meet their nutritional needs.

For these reasons, fancy goldfish should eat:

Fancy goldfish may be more prone to digestive problems that cause health problems. Choosing food that is formulated for their bodies and special needs can help keep them healthier for longer.

Gel foods are the best choice for fancy goldfish. They sink slowly, giving fancy fish plenty of time to nibble on it without gulping excess air at the water surface.

Unlike pellets, gel foods do not absorb water and swell after they are eaten, so they don’t expand inside the fish. And gel foods are easier to digest and better for a fancy goldfish’s fancy digestion.

You can feed a fancy goldfish the same snacks and treats like a common goldfish.

While goldfish are comfortable in water that is too cold for other fish species, and often don’t require a heater, consider adding a heater for your fancy goldfish. Water that is a couple degrees warmer aids their digestion and can help prevent health problems in these more delicate fish.

What Not to Feed a Goldfish

Since they have such big appetites and will eat nearly anything, there are just a few foods not to feed a goldfish. Here’s what to avoid.

Goldfish will eat nearly anything, but that doesn’t mean you should feed them human snacks. High-carbohydrate foods like bread, cookie crumbs, and other human snacks are very unhealthy for a goldfish. This makes it more challenging to keep your tank clean. Instead, stick to healthy, fish-friendly feedings.

Along with bread, avoid feeding goldfish grains of any kind as a general rule. Grain can be difficult to digest and swell inside their bodies. The only exception to the no-grain rule is that goldfish can eat small amounts of cooked rolled oats.

While goldfish do require some protein in their diet, you should avoid feeding them any animal meat because the fat is harmful to them. So don’t offer goldfish beef, pork, chicken, or other meat products.

Most green leafy vegetables are healthy for goldfish, including lettuce leaves, kale, and spinach. However, don’t give a goldfish bitter greens like mustard leaves, rhubarb leaves, or similar “spicy” greens. They contain compounds that may be unhealthy or toxic for the fish.

Avoid Any Added Fats or Oils

Cooking oils, butter, coconut oil, and other fats can be very harmful to a goldfish, so don’t offer any food containing fats and oils.

How to Feed a Goldfish

Whether you have a fancy goldfish or a single-fin variety, here is the best way to feed your goldfish.

Remember that a healthy goldfish can survive up to 2 weeks between feeding, and overfeeding is the most common cause of health problems in goldfish.

Offer as much food as your goldfish can eat in just 2 minutes per feeding, and feed them twice a day. If you offer snacks or treats or have edible plants in your aquarium, reduce their offered food proportionally.

You may also skip feeding them entirely for a day every week or two, especially if you have fancy goldfish. Letting them fast for a day allows their bodies to finish digesting excess food and keeps them healthier.

Wet Down Food Before Feeding

If you choose fish flakes, they can float on the surface of the water, where your goldfish may gulp air as they eat. If you decide on pellets, they can absorb water and swell up inside the goldfish.

Since goldfish are already prone to overeating, they may eat more pellets than they can digest and experience swelling afterward. You can choose a gel fish food formula or pre-soak fish food flakes or pellets to make it easier for goldfish to eat safely.

As you get to know your goldfish, you may notice that they act hungry 24/7, but that’s not really true. Goldfish are famous for eating everything available all the time and are very food-motivated. That continual interest in food can cause overeating and health problems, but it also means that it’s very easy to teach goldfish simple tricks.

For example, use small amounts of food or snacks to teach them to swim through tunnels or play with toys. These kinds of activities provide excitement and enrichment for the goldfish while also being fun for you.

Now you know what goldfish eat and how to feed them, you can take care of these beautiful and intelligent pets for years to come.

How Often Do You Feed a Betta Fish? – You Need to…