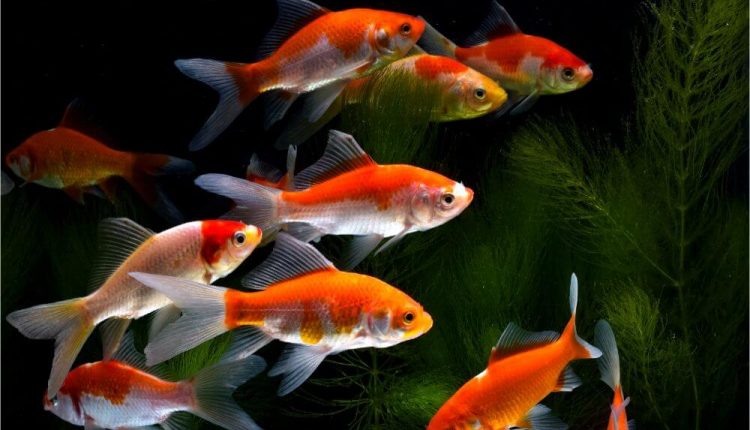 One of the first pets that most of us have as children are goldfish. For the most part, goldfish are relatively easy to care for. Make sure they have clean water, preferably with a pump and filter for oxygen, a few plants and some rocks, and they are good to go. But, what do you feed your goldfish? Obviously, there is specific goldfish food, but what really goes into it, and what do goldfish eat? Keep reading to find out.

One of the great things about having goldfish is that they don’t have restrictive diets and they aren’t overly fussy. It isn’t usually a problem to find food that goldfish will eat when feeding time rolls around.

Most people tend to feed their goldfish food that is made specifically for goldfish, including flakes and pellets. The main thing you need to be concerned with is that your fish are getting the proper nutrients so they stay healthy and live long lives.

Store-bought goldfish food is created specifically with this type of fish in mind, and it contains all of the nutrients they need. So, do you feed them pellets or flaked food? First, let’s look at how each type of food works. If you feed them pellet food, the pellets will sink to the bottom of the tank.

Some people may think that this means that the fish aren’t actually eating the food, because we normally see fish come to the surface to eat. But, your goldfish will be more than happy to swim to the bottom of the tank for their pellets.

Flaked goldfish food sits on top of the water, and the fish will swim to the top of the tank to nibble at it. They come up to just below the surface, and nibble away at the flakes. Like the pellets, the flakes are made to have the proper nutrients goldfish need.

Some goldfish owners like to treat their fish to special, live food. This is a great way to ensure that your fish are getting enough protein in their diet. It also helps to allow the fish to eat as they would naturally in the wild, which is basically hunting for their prey and having to work for it. Some examples of live food goldfish love include daphnia, brine shrimp, and ghost shrimp.

Another thing that goldfish tend to love is snails. So, if you are considering adding snails to your tank, you may want to think twice about it as they may end up becoming goldfish food. Try to avoid putting any freshwater snails, such as mystery snails, in your tank unless you want your goldfish to eat them.

Here are a few more live foods goldfish love to eat, and that are good for them: 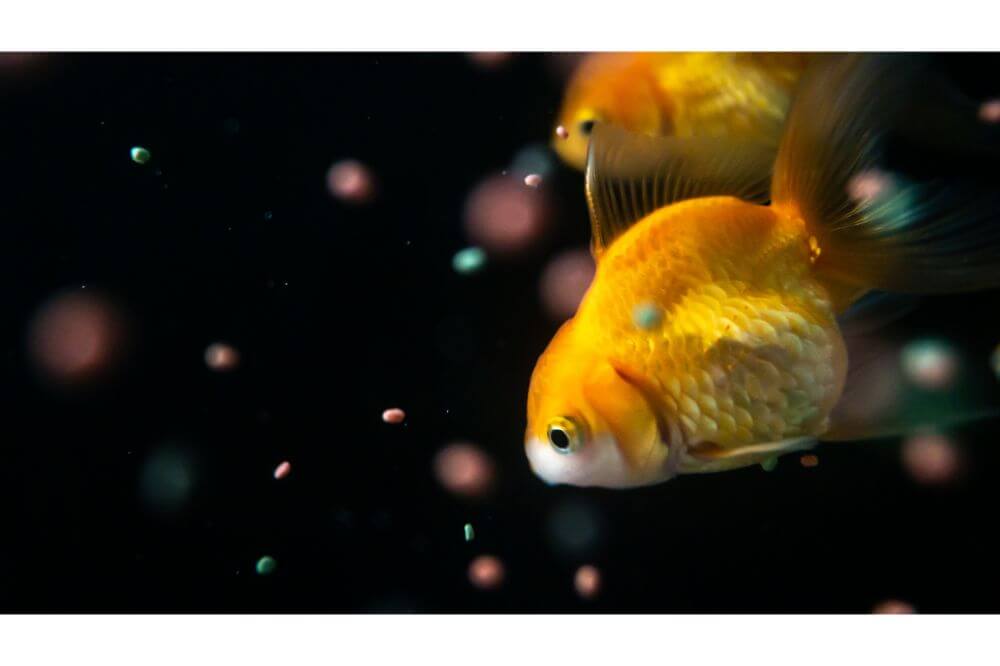 Some people don’t like the idea of feeding their fish live food. If this is the case for you, don’t worry, because you can always give them frozen food. This way, you don’t have to feed them anything that is living but they will still get the protein they need.

You might be surprised to learn that there are many foods you already have in your kitchen that your goldfish will love to have as a treat, or even as part of their regular diet.

For instance, goldfish love small bits of green vegetables and even fruit. Give them a few small bites for a tasty treat. Here are a few more non-live foods that goldfish love:

What do Fry Goldfish Eat?

Baby goldfish are called fry, and they are not nearly as easy to feed as adult goldfish. You have to be very careful with their diets because the food you give them will affect their growth. The food must be tiny enough to fit into their small mouths. Newly hatched fry will grow quickly, but they need to have the proper nutrients, including protein, in order to grow and be healthy.

Juvenile goldfish tend to hang around aquarium plants for comfort and safety. They will nibble on the plants and they will also eat debris on the floor of the tank. Since they love algae, if there is any on the bottom of the tank, they will be very happy.

If you are giving fry goldfish regular goldfish food, it will need to be broken up into tinier pieces so they can consume it easier.

The best choice is to use flaked foods and rub them to make the flakes much tinier than what adult goldfish would eat. There are also flakes that are specifically made for fry, and these are loaded with protein. This type of food is available in liquid, powder, and flake form.

Avoid giving fry goldfish live food because it tends to be more difficult for them to eat. They are often too large and young goldfish won’t be able to get them into their mouths. If you are giving them fruit and vegetables, remember to chop the food very finely before feeding it to your fish.

Once they are about an inch in length, they should be able to begin eating the same food you feed your adult goldfish.

How do You Keep Adult and Fry Food Separate?

Unfortunately, in nature, many animals eat their young, and this can often be said of goldfish. So, it is best to keep fry in a breeding tank. This also makes feeding fry easier, because their food will remain inside the breeding tank where the larger adult fish can’t get to it.

How often should Goldfish be Fed?

Just like any animal, goldfish become used to routines, including feeding time. If possible, it is best to try and feed your goldfish around the same time each day. After a while, the goldfish will get used to this routine and expect to be fed at certain times throughout the day.

When goldfish think it is time for them to eat, you will notice that they become a lot more active and they will begin to gather near the surface of the water when they think they are going to be fed. If this should start happening between feedings, don’t give in. Keep the feeding schedule as you normally would.

It is best to feed goldfish two to three times daily. They don’t have digestive systems that will allow them to have a lot of food at any one given time.

Rather than giving them a whole day’s worth of food at once, break it up into smaller meals. That’s also a healthy rule for humans to follow as well. It is always better to eat several smaller meals than a couple of large ones.

Only give your goldfish as much food as they can eat in a two-minute span. If they finish eating sooner than that, resist the urge to give them more. It is always best to err on the side of caution and not give them enough food rather than too much food. If you notice their stomachs swelling, this is often a sign that they have had far too much to eat and they are bloated.

If there is food left over after the two-minute feeding period, scoop out as much of the remainder as possible. This will not only ensure that they have not been overfed, but also keep the excess from rotting in the tank.

Leftover food will break down and can cause problems in the tank, which will stress out your fish. This will end up causing them to eat less and they won’t get enough of the nutrients they need in order to be healthy and happy.

What if Your Goldfish Stop Eating?

If your goldfish are refusing to eat, there could be several reasons for this. The first thing you should do is make sure that the tank is clean. If the water is dirty, it can affect their health and cause them to stop eating.

You may also want to try switching up their food. They may not be eating because they have grown tired of having the same diet day in and day out.

As mentioned previously in this article, there are many different foods that they will eat, so you can try various things to give them as treats if they are getting tired of their regular diet. The longer you keep goldfish, the easier it will be for you to know what they need and when they need it.

What do Snapping Turtles Eat?