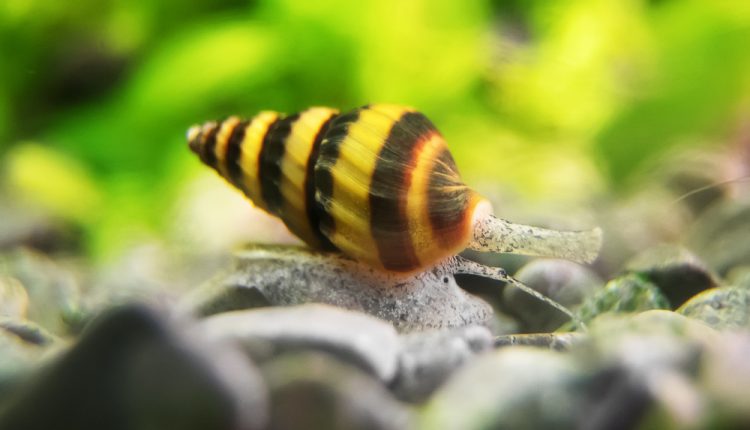 The Assassin Snail is one of the most sought after snails for freshwater aquariums.

They’re called assassin snails because they love to eat other snails, and it’s what they do best!

Assassin snails can be a great addition to any tank if you want an interesting species that is different from common goldfish or koi.

In this article we will discuss everything you need to know about caring for these fascinating creatures; we’ll cover their typical behavior, habitat and tank conditions, as well as their diet and breeding habits.

The assassin snail (Clea helena or Anentome helena) is a freshwater species that belongs to the Buccinidae family.

Assassin snails are predatory gastropods that feed on other species of snail.

They’re often introduced to tanks where pest populations have overtaken them, and they can feed a large collection in just one or two weeks! 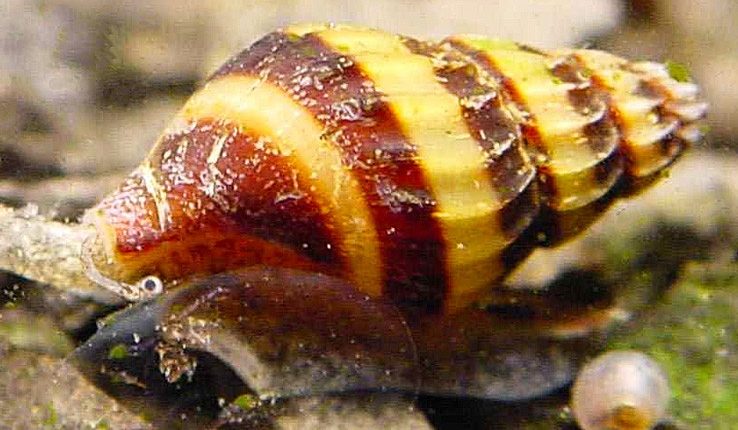 Assassin Snails are origin to Southeast Asia and the East Indies.

Their distribution extends to India, China, Thailand, Malaysia and Polynesia.

They can be found in lakes, rivers and marshes that have slow currents or no flow at all.

Assassin snails are famously slow, so they won’t introduce much activity to your tank.

You might see them less during the day as they choose to come out at night and feed because any creature that moves around in their habitat is likely an easy prey for these predatory creatures!

They will break this habit if you keep feeding them during daytime hours (which would make sense since most snail species eat upon waking up).

They like spending all day buried in organic matter like peat moss held together with calcium carbonate sand-like material called shells made by hydras but sometimes these critters have other ideas.

These creatures aren’t aggressive towards live animals or their food so it’s safe from harm when there is any potential prey around – even smaller fish can be eaten since they’re small enough.

Assassin snails are much prettier than a standard snail.

Their shell is flatter and the shell opening is more narrow than a normal snails so if you don’t know what to look for it’s pretty hard to spot.

When viewed from above, they have stripes along their shells which resemble whorls of different colors so these guys can be really beautiful when in good condition.

The scientist who discovered it dubbed it the “Bumblebee Snail” due to their pattern and color.

This is not always the case though, some assassin snails have shells that are almost completely brown and black.

They come in a variety of colors like: orange, white, purple or yellow though their shell color is usually lighter than the rest of their body.

Usually they have dark stripes running down their shells which makes them very easy to spot against most substrate types if you are looking out for it.

It has very muscular feet and uses them to help it move around the tank, which has slow and steady movements because of this fact (you often find these snails clinging onto glass or climbing up rocks).

When viewed from above you may notice two short tentacle-like appendages hanging off an orange/beige colored head complete with brown & black speckled markings over most surfaces for mobility purposes.

How Big Do Assassin Snails Get?

A new study has found that the average size of an Assassin Snail in captivity is about one inch long. However, some can get up to 2 inches with diet and environment – this isn’t very common though!

How Long Do Assassin Snails Live?

The average lifespan of a healthy assassin snail is 2 years. Sometimes they can reach 3 or 4.

The life of the snail can be extended with a good diet and tank conditions.

Realistically, you don’t need a huge tank to keep your Assassin Snails happy.

Due to their their tiny size (and notable ability to squeeze into spots that most others would consider too small) they can live in 8-10 gallons with plenty of room for exploration!

If this sounds like what you’re looking for then 10 gallon tanks are often enough. Though some people prefer larger spaces up to 30 gallons, which is also an option.

As as their environment feels open and spacious without being crowded or feeling cramped at all times.

How Many Assassin Snails Can You Keep per Gallon?

You can keep 2 assassin snails for every 5 gallons.

Assassin Snails live in tropical climates in the wild, and for this reason it’s important that their water is kept in the tropical range.

The recommended temperature range for Assassin Snails is 70° to 82° F, which means you should aim for a heater and thermometer to keep an eye on your tank’s conditions.

As these snails love to dig, you should have substrate that is loose which allows them to burrow and cover themselves.

Sandy substrates are a great option for your Assassin Snails.

Plants are generally not a good idea when it comes to snails, but assassin Snails are known to be more passive than other snails.

This is because they are carnivorous and have no interest in plants.

It is recommended that you use bushy plants, but it can still depend on the type of assassin snail you’re housing with these plants so keep an eye out for certain behavior.

We strongly advise including some rocks and climbable driftwood since they provide these snails with places that they can explore.

Filtration And Other Equipment

A high quality filter is required for Assassin Snails because they need high-quality water conditions.

When it comes to lighting for Assassin Snails there isn’t much to worry about.

You can choose any type of lighting you want, but we recommend LED lights because they are more energy efficient and have a longer lifespan than other lighting types.

They will show no negative effects from using the wrong kind of lighting so there is nothing for you to be worried about regarding this aspect of their care.

This little guy won’t show any aggression to your fish but will be seen as food by tankmates!

The best match for these guys are gently community ones that occupy upper parts in tanks – not too far above them.

They don’t like deep water, their natural habitat which is just above ground level so it might take some trial-and-error with different types until you find out what works best according to each individuals needs.

Here are some good tank mates for Assassin Snails:

Protein-based foods are generally eaten by Assassin Snails, due to them being carnivorous.

This means they will eat just about any type of fish food that you put in the tank!

You can try: sinking pellets, bloodworms, shrimp pellets or goldfish flakes just to name a few. Just remember they are meat eaters so make sure there is no plant material among their foods as this will not be eaten by them naturally.

In addition to protein-based foods I would also recommend adding some snails from time to time as well – maybe once per week? This way they can have a little snack too since they love eating other snail species!

Assassin Snails are pretty easy to breed in captivity.

Just like most snails, they lay eggs that will hatch into small baby assassin snails, and can multiply very quickly.

Other gastropods are hermaphrodites, but Assassin Snails aren’t. Although they have defined sexes, it’s virtually impossible to tell them apart.

A snail is not just a simple creature. They have an interesting mating ritual that you may find fascinating.

Keeping 6 or more snails together in the same tank can help increase the odds of successful breeding in your tank!

When two snails are near each other they will start following one another for several hours before actually pairing up with them.

This change typically occurs when males feel threatened or dominating over females who don’t want any part of what’s going on.

When the female Assassin Snail has mated, she lays her eggs on any firm surface available.

The tiny eggs take approximately a month to hatch. The youngsters will bury themselves in the sand, and emerge once they are bigger.

Certain breeds of fish will eat there spawn, so they have to be separated. Assassin Snails do not do this, so it isn’t a concern.

The Assassin Snail is an interesting and colorful species of freshwater snail that can grow up to 3 inches long.

If you are considering adding this creature to your home aquarium, be sure that the conditions in a tank will suit its needs before doing so.

This includes a high-quality filter, and a loose sandy substrate. As carnivores, they require a protein rich diet, and will even eat other snails.

Do you own Assassin Snails? If you do then let us know your thoughts in the comments section below.

Full Reviews Of Best Auto Top Off System And All You…