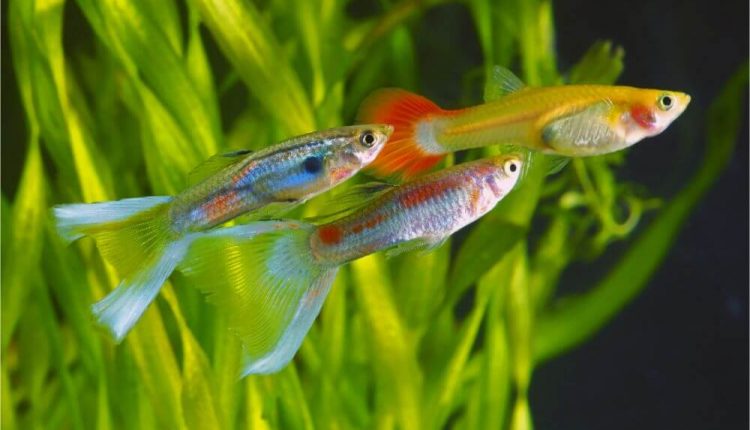 Guppies are freshwater fish most commonly found in home tanks and aquariums and are native to South American waters. If you have ever taken a trip to Brazil, Venezuela, Barbados, and neighboring areas, you likely will have seen them in their natural habitat. They are relatively easy to identify, as they are grey in color. Male guppies may have spots or bright stripes on their bodies, which distinguish them from the females. But what do guppies eat? A guppies’ diet differs according to their habitat, so let’s look at the different types of food they eat under different conditions.

What Do Guppies Eat in Home Tanks?

If you want to keep guppies at home, you have to pay attention to their diet, which significantly affects their growth and appearance. In their natural habitat, guppies can eat anything they like in the water, but you have to provide quality food for them in an aquarium.

Some of the things that guppies in fish aquariums love to eat are:

Guppies prefer to eat small insects that float on the surface of the water. This is why you will mostly find guppies swimming close to the surface instead of going deep. Apart from this, they feed on mosquito larvae.

Another common component of a guppy’s diet is flake food, specially formulated for this species and is readily available at any pet store.

Since they are tropical fish, make sure to find high-quality food for your guppies. This enhances their appearance over time, especially the color of their skin. It is always best to give them flake food first thing in the morning. Avoid pellets, as guppies can’t easily eat large food bits.

Apart from flakes, guppies also love to munch on freeze-dried food, such as brine shrimp or bloodworms. However, bloodworms are only suitable for adult guppies, as they are high in fat.

Guppies enjoy their food more if they get a varied diet. This type of food can be given to them in the evening. Although you can also feed them as live food, it increases the chances of transmitting diseases into a fish tank.

Guppies will also eat homemade food, and it isn’t difficult for you to feed them at all. You just have to cut tiny bits of fruits and vegetables like bananas, grapes, peas, zucchini, lettuce, and many others. You can also feed them a hard-boiled egg yolk, provided that it is cut into small pieces that they can eat.

What do Guppies in the Wild Eat?

In the wild, guppies have various foods they can choose from, and since they are omnivorous, they enjoy both animal and plant-based foods. Therefore, by understanding what they eat in the wild, you will better understand their diet.

Naturally, there is an abundance of live food in the rivers and bodies of water. Guppies thrive by eating animals and insects that are much smaller than them because they can easily be digested. The most common type of abundant live food is brine shrimp, invertebrates, and aquatic insect larvae.

Due to their fondness for insect larvae, guppies effectively reduce the number of mosquitoes in many areas, and they are also used for controlling malaria.

Aside from living food, guppies in the wild also like to eat organic matter such as algae, dead plants, or remains of dead aquatic animals. Mostly, they thrive on soft algae, which they find easy to nibble and chew. Usually, a guppy’s diet depends on what region they are in and the kind of food.

Do Guppies Eat Their Own Babies?

The babies of guppies are called fry, and they mature in 15-20 weeks. However, adult guppies have predatory instincts that cause them to eat their own fry, especially if they are not well-fed.

Guppies may also eat their fry if there are too many of them in a small space. Therefore, if you keep guppies in an aquarium or tank, make sure it’s not overpopulated.

Usually, if you put adult and baby guppies in an aquarium with other types of fish that have a predatory nature, your guppies will look for places to hide themselves and their fry. Thus, ensure that your aquarium is large enough to prevent overcrowding and that all fish are fed on time.

The best way to protect the fry from being eaten by adult guppies and other fish is to isolate the pregnant female guppy in a separate tank or “breeding box” so that their offspring are kept away from predators.

Then, as the fry start to mature, you can put them with the adults. Make sure your aquarium has an adequate number of plants, as well as hiding places for guppies. 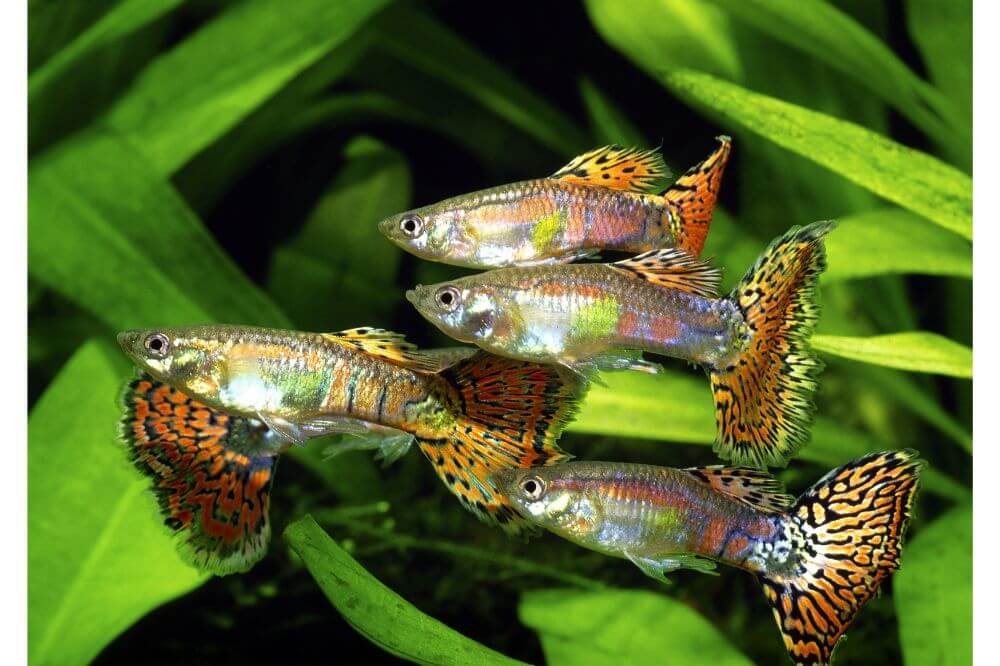 How Often Should Guppies be Fed?

Adult guppies shouldn’t be fed very frequently. If you start overfeeding them, it can become unhealthy for them. It can also affect the water’s cleanliness.

Ideally, you should feed your guppies 1-2 times every day. Provide them with small amounts of food cut into tiny pieces they can quickly devour. More importantly, remove any uneaten food. This way, not only can you prevent overfeeding them, but you can also keep the water in the tank clean.

On the other hand, the fry should be fed more often than adult guppies, as they need more nutrition for growth. For fry, you can make a feeding schedule of 5 times per day, and you should make sure that they get a diet that contains all types of food.

For guppy fry, the meal sizes should be even smaller for them to digest properly. You can vary their diet between freeze-dried food, vegetables, fish flakes, and even egg yolk.

How Long Do Guppies Survive Without Food?

If you have guppies in your aquarium, one of your prime concerns should be that there are no fry among them. This is especially important if you are going away and won’t be able to feed them. If they stay hungry longer, adult guppies will devour their babies.

Generally, guppies can survive up to 2 weeks without being fed, but this depends on the conditions of your aquarium.

Clean your aquarium thoroughly and replace the filter and remove any dead fish or organic matter. You can also set up an automatic feeder for your fish, but it won’t be very useful when it comes to guppies.

Guppies mainly feed on plant and animal-based food. However, if they are kept in a home tank or aquarium, you can also feed them flakes specially formulated for them.

You have to be more careful when you have guppy fry, as they are more vulnerable and often don’t survive when placed with adult guppies. Make sure to provide your guppies with a well-balanced and nutritious diet to keep them healthy.