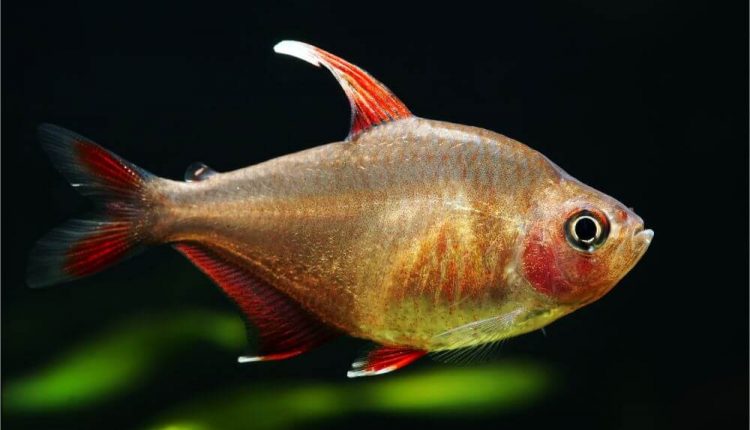 There are more than 32,000 species of fish known to man, and if you’re a fish enthusiast, you’re familiar with the most popular. Among these, one of the most beautiful fish is the Hyphessobrycon sweglesi, more commonly known as the Red Phantom Tetra.

This fish is native to the fresh waters of South America and is usually found in groups of 6-8 fish. This makes them look lovely swimming together in an aquarium.

Let’s have a closer look at the Red Phantom Tetra and why they are popular.

The Red Phantom Tetra has an approximate lifespan of 5 years, and they can be expected to live up to 7 years if taken care of in a well-maintained aquarium.

Hyphessobrycon sweglesi are called Red Phantom Tetras because they have a stunning bright red appearance and a semi-transparent body with dark red markings on their fins. In male fish, the fin is taller and more pointed, whereas females have a white tip on the top of their redfin. Moreover, the male is also slimmer in appearance.

Generally, the Red Phantom Tetra is smaller in size and reaches a maximum length of only 1.5 inches in their lifetime.

Caring for your Red Phantom Tetra

As mentioned above, Red Phantom Tetras usually thrive in shoals of 6-8 fish. If you place them in an aquarium, make sure to put a sufficient number of floating and rooted plants inside so that there is adequate shade and places for them to hide.

Red Phantom Tetras are relatively peaceful and friendly among themselves and other fish species, but the males may engage in a harmless bout with each other.

If you plan to place other fish species with the Red Phantom Tetra, make sure you choose fish that can thrive in the same conditions. They require a sub-tropical climate for healthy living.

Usually, Red Phantom Tetras are found at the top of the aquarium, and they require a temperature between 21-25°Celsius. Moreover, the water should have a pH value between 5.7 and 7.5.

Generally, Red Phantom Tetras are easier to feed than most species because they are omnivores and enjoy a varied diet that can include live and freeze-dried foods; this aids in their healthy growth and beautiful appearance. You can also feed them high-quality flake food, as well as small brine shrimp or bloodworms.

In their natural environment, they have a variety of foods to eat, both plants and animals, and organic matter. Therefore, you should also give your fish a varied diet that matches their natural habitat.

Red Phantom Tetras are generally a peaceful and friendly species that get along well with other fish. They don’t show aggression towards their tankmates, even in their natural habitat. When they are together with their kind, they are calm and peaceful. The males often show off their fins.

Red Phantom Tetras fare well with different fish species when it comes to cohabitation, especially those found in their natural environment, i.e., the waters of South America.

Ideally, it is best to pair them with smaller fish, such as catfish, dwarf cichlid, or other small-sized fish from the Cichlidae family, to which the Red Phantom Tetra belongs. You can also pair them with the Black Phantom Tetra, which is also native to the South American waters.

Here is how you can breed Red Phantom Tetra in your aquarium.

Getting Ready to Spawn

Since Red Phantom Tetras thrive in shoals of 6-8 fish, the female can choose her mate. Therefore, if you keep more females in the tank, it would increase the chances for breeding.

Usually, Red Phantom Tetras are ready to breed when they reach 8 or 10 months. When they start to spend more time with each other, you know that they are ready to spawn. 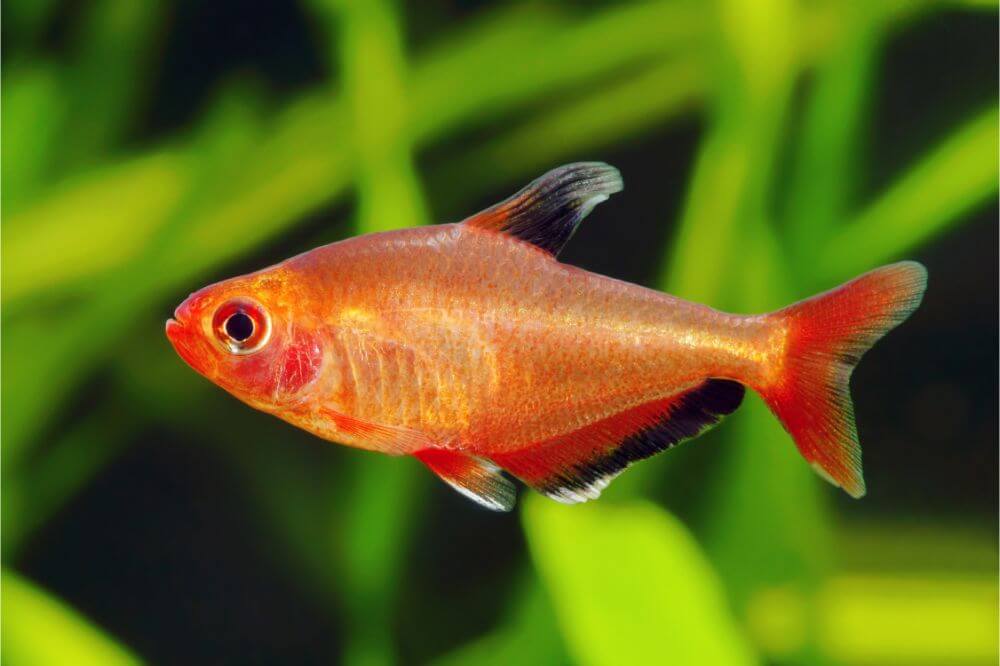 For Red Phantom Tetras to breed, their breeding tank must have adequate lighting and many floating plants. In addition, it should have acidic water along with a small sponge filter.

You can prepare a separate aquarium with 5 gallons of water, plants with delicate leaves, and a heater to keep the water temperature constant.

Since the female lays as many as 300 eggs, you need to build a ‘spawning mop,’ which can just be a couple of floating plants tied together.

When you notice a pair getting closer, you can take them from the aquarium into the breeding tank, and the female will scatter her eggs over the spawning mop.

However, they have a tendency to eat their eggs, which is why you should remove them from the breeding tank as soon as they lay them.

The eggs typically hatch within 30 hours from spawning, and the babies, called the fry, start to grow big enough to swim properly. You can feed them small crushed flake food and hatched brine shrimp. The fry typically settle at the bottom of the tank, hiding in the plants for the first few days.

After the 6th day, you can expect them to swim freely and come closer to the surface of the water like the adults. However, their growth is relatively slow, which is why you must give them time before moving them into an aquarium with other fish.

The Red Phantom Tetra is a beautiful and attractive species. They are popular as aquarium fish and get along pretty well with other fish as well.

Their care and breeding are also easy to manage, even if you are a first-time aquarium owner. Since their lifespan is quite long, Red Phantom Tetras are a great addition to your aquarium.

Why is Aquarium Driftwood Expensive?