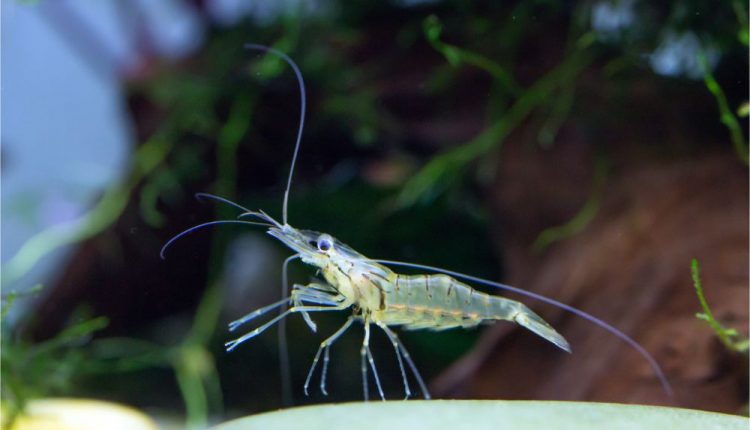 They are easy to keep in a freshwater fish tank, affordable to buy and feed, add activity and visual interest in an aquarium, and keep a tank clean and healthy. Let’s explore these fascinating creatures and learn about how to keep them.

What are Ghost Shrimp?

They are small freshwater crustaceans. They are known by many names, including glass shrimp, grass shrimp, river shrimp, or feeder prawns. Their bodies are mostly transparent, usually decorated with tiny spots in various colors.

They are scavengers and omnivores and actively move, dig, and swim in an aquarium as they search for food. Plus, they eat algae and decaying plant matter, bits of uneaten fish food, and other small debris in a fish tank. They are peaceful and do not typically eat live plants.

Often sold as food for larger, more aggressive fish, or they may be kept to add visual interest to an aquarium and help keep it clean. They are widely available and affordable, so they are common fish tank inhabitants.

Why Keep Ghost Shrimp in an Aquarium?

There are many reasons to keep pet ghost shrimp in an aquarium. The most popular reasons are:

They Keep an Aquarium Clean

They are excellent cleaners of algae, biofilm, and food debris in an aquarium, helping to keep an aquarium clean and healthy.

Active and Interesting to Watch

They are constantly actively looking for food or digging burrows to hide in. Their transparent bodies are also interesting to look at, adding more visual complexity to an aquarium.

Easy to Care For

Depending on the plants, fish, and food in your aquarium, you may need to only rarely supplement the diet of ghost shrimp. While they don’t usually live longer than a year, they are pretty forgiving of aquarium conditions and will eat nearly anything.

Peaceful and Nonthreatening to Most Other Aquarium Inhabitants

They may eat smaller shrimp when in the same tank, but they are mainly peaceful aquarium inhabitants and won’t harm other fish, plants, or marine life.

They Can be Bred for an Ongoing Population of Ghost Shrimp

Breeding them isn’t easy because their larvae are so small, but it’s definitely possible. Because they don’t live very long, breeding your own ensures that you’ll have an ongoing population of these fun and interesting shrimp.

They are Healthy Food

As feeders, they can be an excellent source of nutrition for larger fish and promote more vivid coloration.

They can adapt to many different water conditions, but their optimal water parameters are:

Copper is toxic to them and should never be in their tank. When medicating fish, check the label carefully for copper.

They can survive in tanks as small a 5 gallons, but larger is better. Also, they need live plants and sand or fine gravel to burrow in. They should also be given rocks or decorations with small crevices to hide in when molting.

Speaking of molting, healthy ghost shrimp will molt as they grow and require occasional calcium supplements to form a strong new shell.

They will happily coexist with a wide range of tank mates, although they may become aggressive when hungry and have been observed to become more aggressive in warmer temperatures.

Ghost shrimp should usually be protected from any fish with a mouth large enough to eat the shrimp and not placed with aggressive fish. Even small fish that are aggressive, like bettas, will pick at and eventually kill a ghost shrimp.

They can get along with other shrimp that are approximately the same size. They have been known to kill red cherry and small shrimp species. How to Choose a Ghost Shrimp

Because they are readily available and affordably priced, they are often not treated well during the transport and retail process. Here are a few things to keep in mind when buying ghost shrimp.

When Buying Ghost Shrimp as Pets

Be mindful that if the shrimp have been designated as feeders, they have probably not been treated well and may have a shortened life span due to stress and poor health.

If you want to keep them in your aquarium, look for ghost shrimp that have been designated as aquarium inhabitants.

When Buying Ghost Shrimp as Feeders

Remember that these shrimp may not have been treated or fed well and may be low in nutrients. Before using your ghost shrimp as feeders, keep them in a simple tank for several days and provide them high-quality food with nutrients your fish require.

In any case, look for ghost shrimp that are active and healthy, freely moving all their limbs. If you want to breed your ghost shrimp, it’s helpful to know that the females are larger than males and have a green-tinted “saddle” that wraps around to her underbelly.

Males are smaller and lack the distinctive tinting, while both males and females will have spots.

How to Care for Ghost Shrimp

They are tolerant of a wide range of tank temperatures and lighting conditions. Caring for them is simple, so here are the basic guidelines.

They are flexible eaters and will live easily on store-bought fish food with little supplementation. If you have many mid-water fish, sinking algae pellets makes it easier for shrimp to access the food. A single pellet will feed many shrimp, so avoid overfeeding.

Offer calcium supplements or calcium-rich foods to support a strong and healthy shell.

They often dig burrows, so they need fine sand or gravel that allows them to dig without damaging their delicate antennae. They build long networks of temporary burrows in a continual cycle, so their busy construction is another interesting aspect of these shrimp.

Happy, healthy adult ghost shrimp will molt every 3-4 weeks as they grow, and juveniles will molt every 1-2 weeks. You can remove the outgrown shells from the tank or leave them there for the shrimp to nibble on.

After molting, they are vulnerable until the new shell forms, needing consistent water quality. They prefer to hide in plant foliage or in crevices in rocks and decorations to stay safe.

A well-cared-for ghost shrimp will live for a little over a year. They will breed in captivity, but care should be taken as the ghost shrimp larvae are extremely small and prone to be eaten by anything else in the tank, even, sometimes, ghost shrimp themselves.

Well-fed ghost shrimp are a good source of nutrition for larger fish and are often purchased and kept for that purpose. Even smaller fish will often chew on a shrimp’s delicate legs or antennae and may eventually kill and eat a shrimp.

On the other hand, they are increasingly popular additions to a freshwater aquarium because they are active and interesting, easy to take care of, and do a great job helping keep a tank clean.

Although often kept in overcrowded and unhealthy conditions during shipping and retailing, they are affordable and widely available. When well cared for, they are peaceful tank mates who make your life easier and help keep your fish healthier.

If you have a healthy freshwater tank with smaller, more peaceful fish, consider adding some ghost shrimp to make your aquarium cleaner, more active, and interesting.

These busy little creatures are fascinating to watch as they scavenge, burrow, explore, and enjoy life in your aquarium.