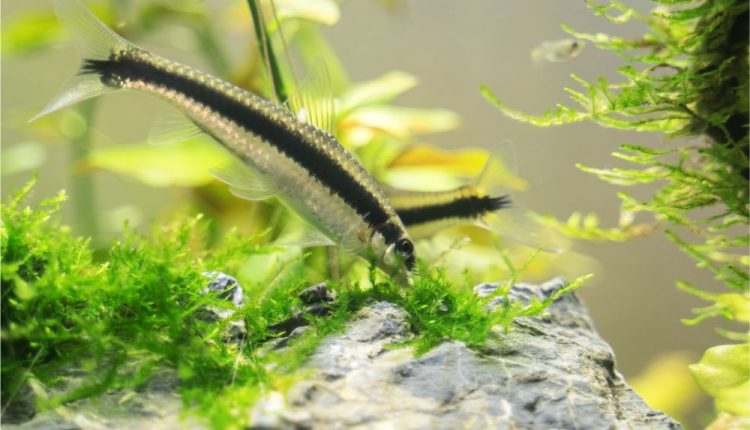 Siamese Algae Eaters do just what the name suggests: They are excellent and efficient algae eaters that help keep an aquarium clean.

Siamese Algae Eaters are freshwater fish in the carp family. They are native to Southeast Asia, found in the Mekong and Chao Phraya basins and the Malay Peninsula, living in freshwater streams and rivers, and are algae-eating bottom dwellers.

They are low maintenance and peaceful fish, so they are an excellent choice for beginning aquarists and a great tankmate for a wide range of other fish.

While the Siamese Algae Eater is not especially colorful, they are active fish and will school together. So, they offer more visual interest than slow-moving algae eaters like snails.

These are often called the “true” Siamese Algae Eaters and are the most desirable species for ordinary fish tanks. To identify this fish, look for:

Also called the “Chinese Algae Eater,” this large fish is a popular food source and unlikely to be mistaken for a Crossocheilus, despite the identical common name.

The Flying Fox looks very similar to a Siamese Algae Eater, and the two species are often confused in the aquarium trade. To identify a Flying Fox, look for:

The Cambodian logsucker is another algae eater that looks virtually identical to the Siamese Algae Eater. To identify this fish, look for:

In contrast, the true Siamese Algae Eater has only one (although this detail may be hard to see in these small, active fish).

The true Siamese Algae Eater is a pale grey or silver freshwater fish with a dark or black stripe down their sides from head to tail. They have a long, narrow body and reach up to six inches in length.

Siamese Algae Eaters spend most of their time near the bottom of slow-moving, densely planted rivers and streams.

They require lots of plants and small caves for shelter and hiding places and need a soft substrate that won’t scratch the bottom of their bodies.

They tend to stay near sheltered spots and seldom swim to the water’s surface. But, they are also active fish that have been known to jump, so they require an aquarium with a lid.

Siamese Algae Eaters do not have the “swim bladder” that most fish have and have to keep moving, or they sink to the bottom.

Because they cannot rest in the water, they like to have rocks or décor to rest on. It is also essential to create small caves and hiding places at the bottom of the tank where they can rest, hide, and be alone without having to swim.

Siamese Algae Eaters can be kept alone but do best in a small school of 4-6 individuals.

As you may have guessed, Siamese Algae Eaters eat algae, vegetation, and decomposing plants. However, they are omnivores and scavengers and will eat protein when they can find it. They are not fussy eaters and have a tendency to overeat.

They will eat flake and pellet foods, live foods, algae wafers, and more. Siamese Algae Eaters may prefer prepared foods and stop eating tank algae, especially if they are overfed. Feed them once a day, and limit food to the amount they can finish in a couple of minutes.

Siamese Algae Eaters may nibble on plants when they are hungry, so it’s a good idea to keep a fast-growing plant species in your tank with them. Siamese Algae Eaters are peaceful fish and will get along with a wide range of tank mates. They are also relatively tolerant of diverse water conditions and not prone to disease.

While Siamese Algae Eaters are social and do best in small schools, it’s essential to avoid overpopulation for your tank size.

Like any fish, Siamese Algae Eaters create waste and ammonia, and having too many will eventually generate more tank dirt and debris than the fish consume.

Siamese Algae Eaters are a great mix of active and social while being mellow and calm. They are active swimmers but will also seek out quiet places to rest and hide.

They move quickly from algae patch to patch, actively scavenging and investigating the bottom of a tank. This activity and motion can sometimes be distressing for other aquarium inhabitants who prefer a calmer environment.

It is difficult for home aquarists to breed Siamese Algae Eaters. It is virtually impossible to distinguish males from females until they are 3-4 years old when the females’ larger size becomes apparent.

Because breeding appears to be dependent on the presence of certain hormones, and we aren’t exactly sure what triggers spawning in this species, they are only successfully bred in professional fish farm environments.

How Often Do You Feed Goldfish?