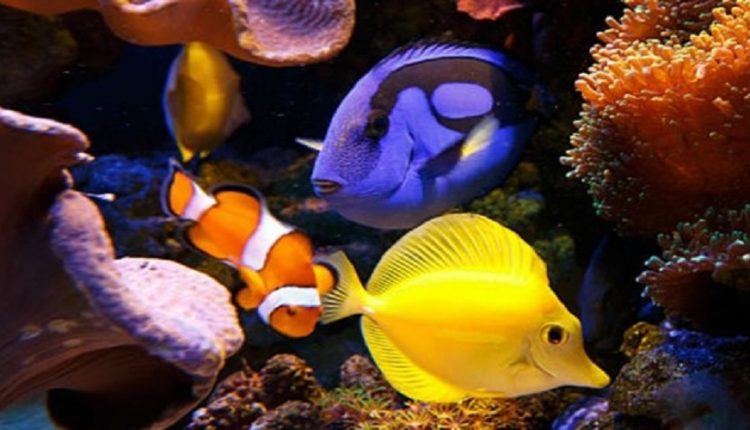 Every year, thousands of snorkelers and divers travel miles to enjoy the elegant beauty of the underwater creatures. Indeed, the intricate patterns and stunning tones of underwater inhabitants look fascinating. But have you ever wondered why fish are so colorful? As it turns out, this question is more complex than you might think.

The exact role of these patterns and the colorful appearance of fish still puzzles marine scientists. To come closer to unveiling this mystery, the researchers have decided to answer another question first – what exactly do these aquatic animals see, and how strong are their visual capabilities? After all, while these animals may look pretty to us, we’re not, as they tell, the intended audience. The color patterns exhibited by water inhabitants evolved to aid their survival in the habitat they live in. Therefore, it is important to understand during which circumstances and to which other creatures, fish, show off their color patterns.

What Do Fish See?

Since the anatomy of fish eyes is entirely different than that of the human eyes and sometimes even from that of the various fish species. It is a guess to rule out how they perceive their neighbor fishes. Fish sight and its strength develop in response to the lifestyle, habitat, living conditions, and food intake. The depth of an aquatic environment where a particular fish species lives also plays a vital role. Water is a natural light filter, so the deeper we go, It will absorb the more colors.

For example, the reddest light will get absorbed within 20 meters below the water’s surface. It causes a bright red fish to appear almost black at depth. In most cases, when the dwellers reach deep waters, they cannot perceive red color at all, as their eye construction and sight are tuned to less light.

Certain fish species are pretty colorful, yet they do not perceive their coloration. This makes scientists and researchers believe that these particular species developed their coloration merely based on the demands of the environment. It is also noticeable that those species of fish that shift in different habitats during various phases of their lifetime tune their visual systems following the challenges of each new environment. This ability to adjust to new conditions enables fish to maximize the amount of visual information they can get from their surroundings.

What Are All These Colors to a Fish Eye? 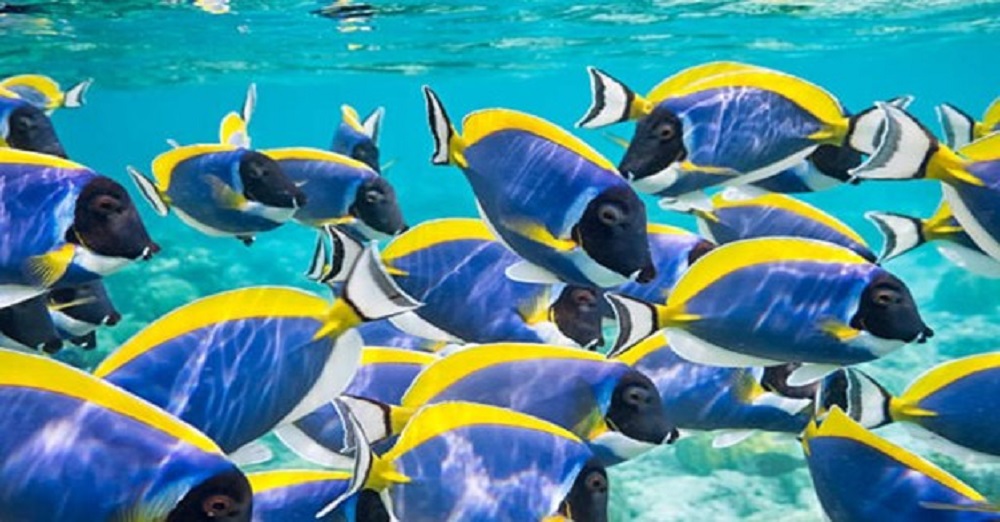 It is an important point to tackle before trying to speculate about why fish possess coloration. What are all these shades to a fish eye? How do they perceive these different yet beautiful colors?

In the above section, we have mentioned that the anatomy of fish eyes differs from that of human beings. With this fact, we can assume that fish can see the world around them and their marine counterparts, but in a completely different light.

George Losey, a zoologist, found so many differences in the anatomy of the fish eye between humans and among their different species. Different species of fish see the ‘same color’ differently. A species may perceive something dimmer, whereas it may appear brightly colored to another species. Also, distance greatly influences the sharpness of different color contrast. Therefore, how we see the coloring of a particular fish may not be the same in the eye of another fish.

Interestingly, most fish can change their color to some extent, which makes the whole matter even more complex. In some cases, these changes of color take longer durations, e.g., during maturation. Other fish, however, change their color throughout a cycle of day and night or even within seconds. There are some types in which the color of a fish depends on its emotions – e.g., when it is scared or angry.

Why is Fish So Pretty and Colorful, though? 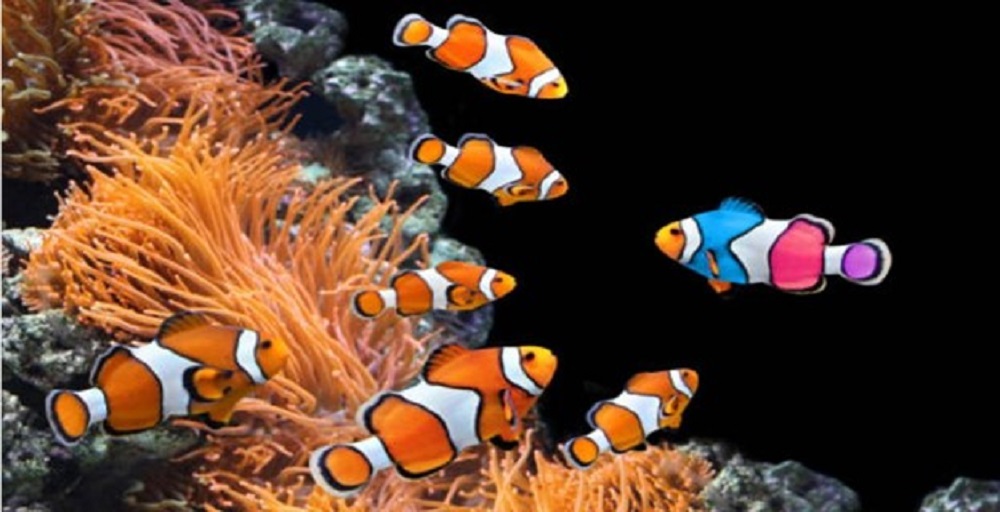 So, are we close to grasping the real reason behind the stunning colors of fish? For some, all of this may be a mere coincidence that these colorings appear marvelous to us since the concept of beauty is primarily based on human subjective perception. Except for attracting potential mates during mating, it does not have much to do with looking pretty.

We have a couple of theories trying to explain the phenomenon of these beautifully intricate patterns. The first one, developed by Alfred Russel Wallace, supposes that the coloration of a fish depends on the habitat it lives in. On the reef, everything is colorful. Therefore, the main purpose of the coloration on a fish’s body is visual protection from its predators.

In the mid of 20th century, biologist Konrad Lorenz presented a new theory that suggested that these complex colors are an instrument of individual identification and recognition because, in a cramped reef environment, there are no two identical color patterns. It also helps fishes save energy that they would otherwise spend on inter-species competition and aggression.

From these theories and the results of multiple research pieces, we can conclude that colors on fish bodies help them convey information and signals, such as territory, sexual display, and disguises. However, we cannot apply these generalized explanations to every case. There are still several contradictions among the three survival instincts mentioned above. For example, showing off bright colors to impress a potential mate may not be the smartest trick, especially if a potential predator is sneaking around.

In short, there are too many variables, i.e., eye construction, change of color, the difference in visual perception of different species, etc., to say why exactly fish are so colorful as they are. There is also much of what we still do not know about and cannot check with the current technologies we have. At the moment, we can only guess and theorize about the matter, which makes every immersion into the underwater realm even more interesting and full of a fascinating mystery.

Why Are Marine Fish More Colorful Than Freshwater Fish?

Think about the most beautifully colored fish at your local pet store. Eye-burning blues, bright neon pinks, electric yellows, most possibly all of them are marine fish (or ocean or saltwater).

While there are a few types of stunning freshwater fish, such as guppies, cichlids, and gouramis, it generally looks like the most colorful fish available there are marine fish. So, is it true that saltwater fish are more colorful than the ones in freshwater?

Well, we can say it is. The coloration of fish bodies may differ depending upon which part of the ocean we are looking at. Fish living near coral reefs tend to look more colorful than those protecting themselves from predators’ attacks.

Which Saltwater Fish Are the Most Colorful Ones?

Environment, genetics, evolution,  and overall health contribute to the amazing coloration palette of fish colors in the saltwater species, a favorite among aquarium hobbyists. The most stunning and bright examples include the following:

Which Freshwater Fish Are the Most Colorful Ones? 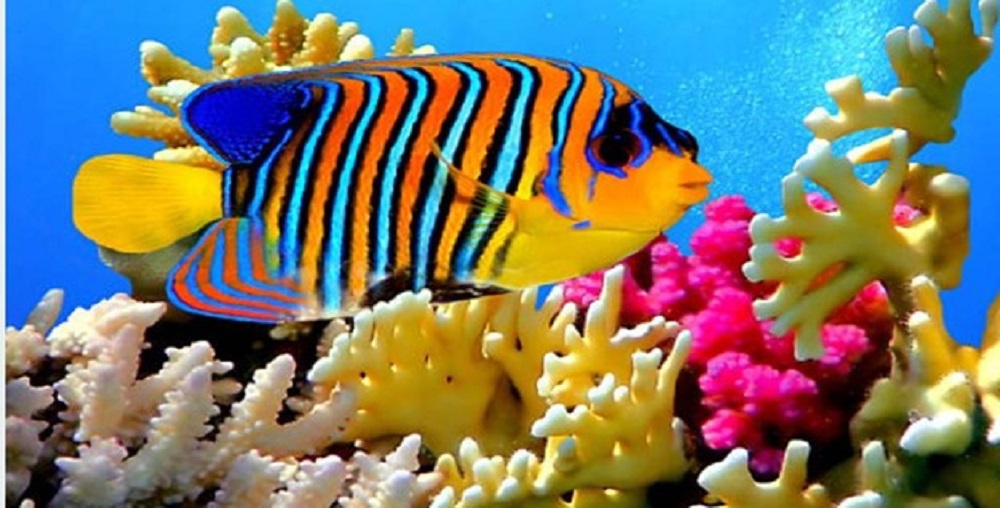 Just because saltwater fish or marine fish tend to be more vibrantly colored than freshwater fish doesn’t mean they do not exist! There are species of freshwater fish that are just as stunning and bright as their saltwater counterparts. These include the following:

It is fascinating the subject of fish coloration. Any fish’s genetics plays perhaps an essential role in what color the fish will appear. Hopefully, this article will have given you some insight details into why your fish are so colorful – and why that color can change in some instances.

Fish, undoubtedly, are one of the most fascinating and colorful creations of nature. But have you ever thought, what is the purpose of these stunning colorations you see on their bodies? This is the mystery that we tried to answer in this article with the help of different theories and research conducted. Although we do not know much about it and none of the current technologies can help us investigate this matter, we can assume that fish, first of all, adapt to their surroundings by putting on their colors to avoid attacks from predators. Another reason can be their desire to attract potential mates by trying to impress them with their eye-catching palette.