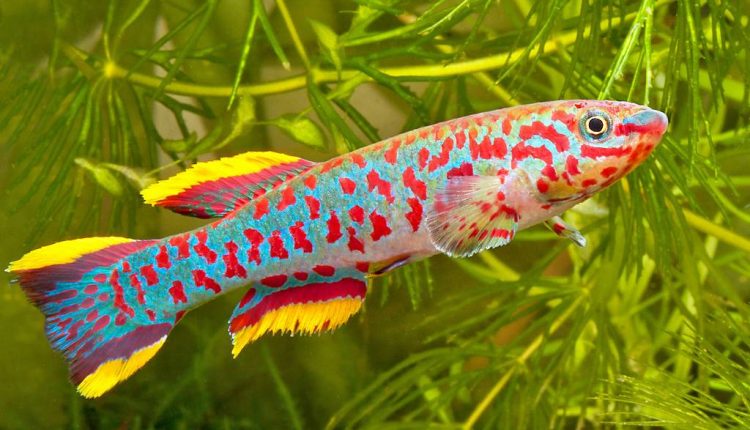 Killifish come in a wide range of designs and colors, and they’re all quite lovely. These freshwater fish make a fantastic aquarium addition.

They are not only good tank mates who get along with most fish, but they are also fairly straightforward to care for. We aim to teach you everything you need to know about Killifish in this book so you may become a Killifish expert!

We’ll go over all you need to know about Killifish, including how to care for them, their diet, and aquarium necessities, among other things. 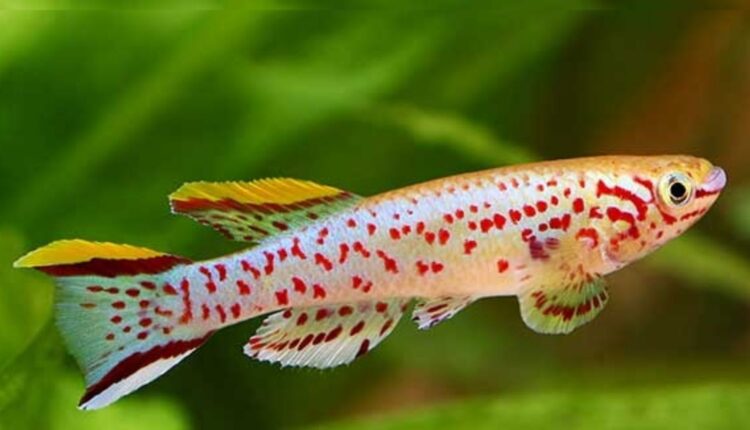 They feature beautiful patterns and colors that are shockingly vivid. Their aggressive-sounding name may turn some people off, yet they are far from hazardous. Killifish are actually rather friendly.

The name killifish comes from the Dutch term killi, which relates to the killifish’s favored habitat of quiet streams, low lying channels, or within a ditch.

A Killifish can live for 2 to 5 years if they are given proper care and kept in a well-kept aquarium with the optimum circumstances.

Killifish are small, ranging in size from 1 to 2 inches in length, with some reaching up to 6 inches.

Here are some of the most common Killifish species, which number over 1200:

Fins vary in length and width depending on the species; some are long and broad, while others are rounder and shorter.

Killifish, despite their intimidating moniker, are actually fairly calm and placid creatures. This means they’ll get along swimmingly with other clam tropical fish.

Even though male Killies are placid fish, it’s vital to remember that when they’re in the same fish tank, they might be violent to one other.

The simple approach is to make sure there are plenty of hiding places for the fish. If you’re going to get Killifish for the first time, it’s a good idea to start with only one male until you get a better understanding of their needs.

It’s safe to keep many females together if you have a large enough tank because they aren’t aggressive.

Finally, keep in mind that they can jump very high when there is no tank cover present.

Killifish can be found in Canada, Argentina, Africa, Southern Europe, and Asia, among other places. There are two types of habitats for this species:

Aquarium specialists advised that you have a year or two of experience caring for fish before considering maintaining Killifish.

It’s not that they’re tough to care for, but you’ll need to learn how to deal with specific challenges that may develop from time to time. There’s no reason why you can’t obtain them a little sooner if you put in the effort to learn and explore.

One of the most important things to learn about is how to recognize diseases like fluke, which this fish is prone to. This occurs when a tropical fish is infected with gill worms and later develops fluke symptoms.

The fish develop an increasing amount of mucus, which suffocates them. Other fluke warning indicators to be aware of include:

How to treat fluke?

Anti-worm medication can be used to treat fluke if it is caught early enough.

In the wild, most Killifish are carnivores, feeding on worms, bug larvae, and different crustaceans such as shrimp.

Other types of Killifish are omnivores that eat algae and other plant materials as part of their diet. Killifish should be fed live foods rather than flake food, which is something that rookie keepers should think about before buying.

It’s also crucial to offer them a well-balanced, healthy meal comparable to what they’d eat in their native environment. Here are some excellent suggestions:

If you intend to breed Killifish, you’ll need to take an even more measured approach to their feeding, as well as constant monitoring.

We’ll go over all you need to know about Killifish tank requirements in this section.

Killifish require various water conditions for each species, and they might be sensitive to changes in the primary tank characteristics.

Killifish like softer, somewhat acidic water in their native settings. Killifish grown in captivity have been shown to adapt to any type of aquatic environment in which they are raised.

Let’s take a look at some of the most common water issues:

Keep in mind that these are only suggestions. Some Killifish species require varied levels of hardness in their water.

Before you bring the Killifish home, you should simply inquire about the water conditions in which they were raised.

It’s critical to execute weekly water changes of only 10% of the total volume to keep your fish healthy and reduce stress. If water changes are conducted every two weeks, the percentage should rise to 20% to 25%.

To avoid too many environmental changes that might stress your fish, use a water conditioner to purify standard tap water.

This may be done with an aquarium water changer or a siphon vacuum gravel cleaner.

Killifish can become anxious if they are left alone, thus it is critical to maintain them in a group for their health and well-being.

Here are some Killifish tank mates to consider:

It’s important to remember that two or more male Killifish might get into a battle and become hostile.

Killifish may be simple to breed if you know the basics. It’s simply a matter of creating an environment that closely resembles their native habitat.

“Annual” and “non-annual” reproductive characteristics are the two types of reproduction. Let’s take a closer look at both of them.

Killifish in the natural reside in non-permanent bodies of water, where the water evaporates each year. This implies you’ll have to be aware of their natural reproduction cycle.

Because of these conditions, the yearly breeding timetable for Killifish is relatively short, and they will need to reproduce soon. This is accomplished by depositing eggs in moss, where they will remain until the water is replenished.

Here’s how you can do the same thing in a tank:

Annual Killifish are far more difficult to reproduce than none-annual Killifish. Because you don’t have to go through the process of drying out their home, it’s a lot easier.

The only thing to keep in mind is that there shouldn’t be too many objects in the tank, such as plants.

Non-annual fish take longer and slower to reproduce than annual fish, but you may anticipate them to live longer.

Where to Buy Killifish

Killifish may be difficult to come by at typical pet stores. The best thing to do is conduct an internet search.

Before you buy, just make sure you have the right tank and circumstances for the species.

Killifish are vibrant and attractive fish that make a great addition to any aquarium. Keep in mind that male Killies can be violent against each other, however many females in the same tank are perfectly OK.

If you’re thinking about getting Killifish, do some research on the species you want and make sure you have the right tank setup for it.