A Guide on the Red Coris Wrasse

The Red Coris Wrasse is found on reefs located in the Indo-Pacific and Hawaiian region. They are also commonly known as the Clown Wrasse, Red Labrid, or Yellowtail Corris.

When they are younger, these species are bright red in color with white spots outlined in black. But as time passes, they tend to grow up multicolored with tails that are bright yellow.

However, it is a carnivore that usually feeds on small vertebrates and mollusks that are located on the reefs. These species are not deemed as safe fish to be kept in an aquarium and are usually found in the wild only.

Red Coris Wrasses have the ability to live for approximately five years in a quality environment. However, it is important to note that deteriorated environmental quality and diet might drastically affect their lifespan.

In the wild, adult specimens can grow up to one foot. However, they may grow up to six to eight inches in an aquarium. Depending upon their age, the appearances of these fish may vary to a significant extent.

In juvenile fish, the body is orange with white tiger stripes or spots around their back region; the stripes and fins of these fish are outlined in black.

During adulthood, the bodies are usually blue in color and the fins include shades of yellow, red, and blue. Whereas, the face is orange along with green stripes.

The Red Coris Wrasse needs an aquarium with a capacity of 125 gallons or greater. This should include a sandy bottom which would allow it to burrow into, when sleeping or when it feels like it is under threat.

During the early years, the Red Coris is safe with almost any fish that would not prey on them. However, as they grow, they have the potential to become predatory. Lastly, it is important to note that they should not be kept with any invertebrates.

In order to ensure the well-being of these fish, specific water requirements will be needed. The water needs to be maintained through frequent filtration and water changes.

Not doing this would cause ammonia, nitrite, and nitrate to accumulate, which might lead to detrimental consequences for the fish such as poor health and even death. Twenty to thirty percent of the water should be changed each week.

As the Red Coris Wrasse inhabits coral reefs in oceans, it is imperative for the aquarium to have an optimal salinity level. Therefore, the salinity should be between 1.020 and 1.025.

Moreover, they are found in coral reefs which contain warm water. Therefore, the aquarium water should be heated through a fish tank heater to maintain the optimal temperature which is around 72° F to 78° F.

The optimal pH level of the water should be around 8.1 to 8.4 for Red Coris Wrasses. It is imperative to note that if the pH level is too high or too low, this might have adverse effects on the lifespan of the fish.

Red Coris Wrasses are carnivores and in their natural habitat, they eat many types of invertebrates. Wrasses need to be fed small-sized foods such as blackworms, fresh or frozen seafood, and grass shrimp.

Fish flake food or pellets can also be fed to them. Mostly, in the wild, the smaller-sized species eat small invertebrates and parasitic copepods.

To keep these fish healthy, it is required that they are fed two to three times a day. For smaller wrasses, make sure that the food is finely chopped so that it is convenient for them to ingest.

Also, make sure to feed them in small quantities as they cannot digest a large amount of food in a single feeding. 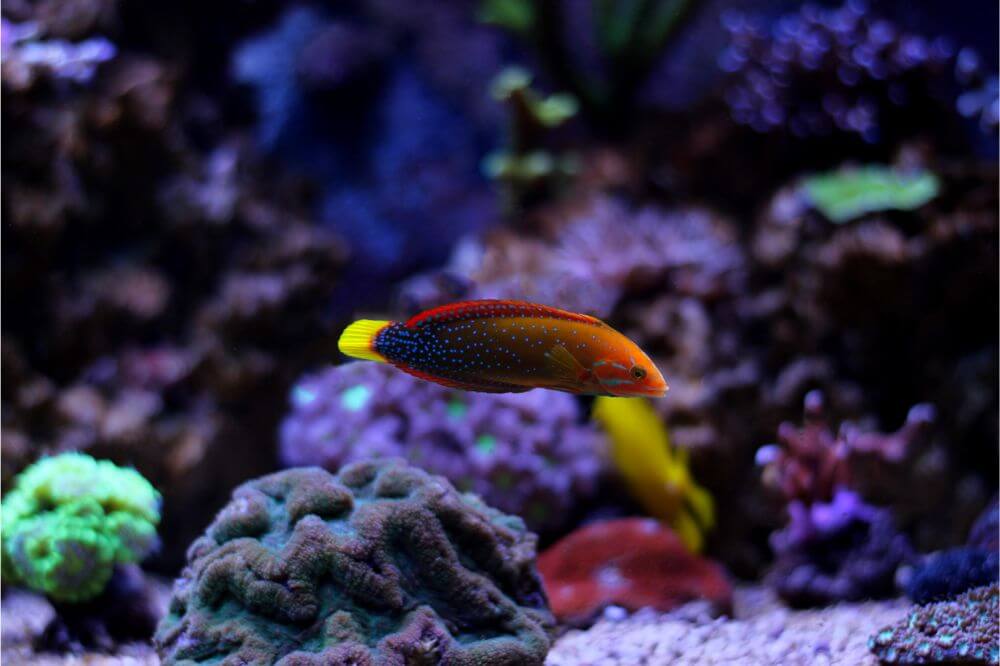 Red Coris Wrasse is inherently a significantly active species. The younger ones are quite shy and non-aggressive in general. However, as they grow up, they tend to become aggressive in their behavioral aspects.

Red Coris Wrasses carry out their breeding by developing mating pairs and laying their eggs in nests. However, it is important to note that these species are very unusual to breed in captivity. Because of this, optimal environmental conditions are difficult to recreate in an aquarium environment.

Red Coris Wrasses are simply one of the most beautiful creatures out in the sea. Their bodies are remarkably vibrant and colorful. Their appearances might change over the course of their lifetime and indeed, it is a phenomenal experience to be able to witness those magnificent changes.

Due to their carnivorous nature, it is crucial to take care of their nutrition which may be the reason why it’s so tricky to keep these fish in captivity. They also get aggressive as they grow, which might be another inconvenience for them to be kept in aquariums at home.

Ensure the conditions of their surroundings are constantly monitored and maintained through effective measures. The water should be regularly changed along with certain conditions being met to ensure optimal growth. These include the temperature, pH, and salinity levels of the water.

If these conditions are not met, this might lead to drastic consequences for the overall health and growth of these species.

Furthermore, they are tricky to be bred in captivity as up till now, there have been a few cases where they could successfully breed under such conditions. Therefore, unfortunately, it is unlikely that one may be able to get these wrasses to breed in their home aquarium.

Other than that, if you’re looking for a beautiful addition to your salt-water aquarium, look no further than the Red Coris Wrasses.