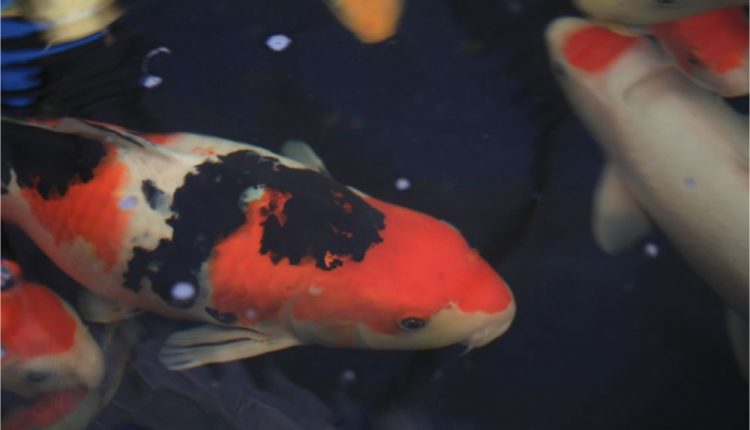 When you see that your goldfish is turning black, you might immediately think that something is not right.

While it’s true that, often, turning from gold to black can be a normal phase in a goldfish’s life, it’s also true that it can be an indicator of some form of the disease.

For instance, while this is very rare, the water in your fish tank may contain high levels of ammonia that cause your fish to turn black.

In any case, we will cover the causes and remedies for your goldfish turning black. Also, we will show you the best practices to keep your goldfish healthy and safe.

There is a handful of reasons as to why your goldfish is turning black. This can be a natural change caused by your goldfish’s genetics, environment, reaction to stress, or attempt to recover from physical injuries. These issues are entirely harmless for your goldfish.

On the other hand, color change in goldfish may also indicate a severe problem. It can be a signal of ammonia poisoning or black spot disease. In these cases, your fish’s life is in danger, and you need to act quickly.

Now, let’s go through all scenarios in which your goldfish might turn black:

Your Goldfish Is Blending Into Its Environment

Black decorations or dark wallpapers in your fish tank may cause your goldfish to turn black. But this is nothing to be concerned about.

Your goldfish is simply blending with its background. To change their color to black, goldfish release dark pigment called “melanin.” This is a natural process, and your fish suffers no harm.

Some goldfish are predestined to turn black; it is written in their genetic code. This color change is usually a result of mixed breeding.

If you bought your goldfish for a meager price, the chances are that you didn’t buy a purebred fish. These types of goldfish usually turn black within the first year of life. The black color becomes more dominant as the fish matures.

Furthermore, other parts of a goldfish may change from orange to white. This is also normal if genetics are at play. The important thing is that this genetic reaction doesn’t affect the goldfish’s quality of life or lifespan.

Ammonia is a toxic compound that is always present in your goldfish’s habitat. The fish themselves produce ammonia through waste and breathing.

Also, excess food rots and releases ammonia. Plant litter decomposes as well. So, if you see that the water in your fish tank is murky, it probably means that ammonia concentration is high.

Another cause of high ammonia levels in your fish tank can be your tap water. It may contain chloramine, a chemical compound consisting of chlorine and ammonia.

Water companies use this to kill harmful bacteria in the water, but this chemical affects your fish’s health since it contains ammonia.

In these conditions, your goldfish can suffer from ammonia burns on its skin due to increased ammonia levels in its environment. When it turns black, it’s an indication that your goldfish is attempting to recover from these injuries.

Yes, fish can be stressed too. This can occur if you have recently made a drastic change in your goldfish’s environment, introduced new fish into its habitat, or moved your goldfish into a new aquarium.

Thus, your goldfish can turn black if it has experienced a drastic change in its life. But don’t worry. This should pass as soon as it adapts to the changes in its environment.

The reason behind this is that water snails transmit this disease, and it is doubtful that you have these tiny creatures in your aquarium or bowl.

Still, if you keep goldfish in ponds, you want to ensure that your goldfish’s environment is cleaned regularly. Water snails are not the only carrier of black spot disease. Goldfish can get it from bird excrement as well.

The thing is, black spot disease comes from a parasite. These parasites lay eggs from which larvae come out and get under the skin of your fish. As your fish attempts to fight these parasites, it creates black cysts.

Apart from black spots, you will also notice erratic behavior in your goldfish. When they contract black spot disease, they suffer irritation that causes them to rub against the surfaces or flick their whole body.

Perhaps your goldfish hadn’t been taken care of properly before you bought it. Rough handling can cause physical injuries. A black color is an indicator that the goldfish is self-healing.

So, this might be a good sign. The black parts should return to their normal color in approximately two weeks, but sometimes your goldfish may need more time to fully recover. What to Do to Cure Black Smudges on Goldfish?

It depends on the cause of black spots. If they appear because of the fish’s genetics, there is nothing you can do. Again, this is completely harmless, but the black spots will stay there throughout their entire life.

However, if your fish is blending with its environment, dealing with stress, or recovering from physical injuries, the black spots on its skin will fade away.

Consider changing your aquarium background to a lighter one. If you added new fish or decorations into your fish tank, let your goldfish adapt to its new friends and environment.

Also, if your goldfish turns black soon after you bought it at your local pet store, it may have suffered physical injuries in its last habitat.

With black spot disease, the situation is different. You have to immediately remove water snails from your goldfish’s environment. Also, if you keep goldfish in a pond, clear the water of bird waste. Refreshing your goldfish environment will enable it to heal itself properly.

Finally, the most common reason why your goldfish is turning black is due to ammonia poisoning. In this case, there are a few simple steps you need to follow:

To ensure that ammonia levels are normal, you need to use an ammonia test kit and regularly check your fish tank water.

If the test shows that the level of ammonia is above 1 PPM, this means that the water is dangerous to your goldfish and requires immediate action.

You need to reduce the pH level of the water. Change the water in the fish tank and add new water of the same temperature. Do this several times, with pauses between each change.

As mentioned earlier, the tap water that you pour into your fish tank contains chloramine, a dangerous chemical that binds ammonia and chlorine. Thus, you have to use a water conditioner that neutralizes ammonia. Seachem Prime is one of the best on the market.

And, you can even pour it directly into your fish tank when ammonia levels are higher than usual. This will instantly reduce the amount of ammonia and help you save your goldfish.

So, adding activated carbon is good for decreasing your tap water’s pH level and making it more habitable for your fish.

Since food also releases ammonia when decomposed, you might want to stop feeding your fish for a day or two. Don’t worry; they won’t starve to death. Ammonia poisoning is a far greater threat and needs to be addressed first.

Will Your Fish Recover?

If you act timely, then yes. In an environment high in ammonia, your goldfish will first get ammonia burns on its fins, scales, and skin. If you pay close attention and act in time, your fish will recover from ammonia burns in three to five days.

Can Goldfish Turn Back to Their Original Color?

In cases of physical injures and changes in the environment, your fish will turn back to its original color once it has recovered or has accustomed to the new surroundings.

Genetic reactions, however, are irreversible and will cause your fish to remain black throughout its whole life.

With ammonia poisoning, the situation can be tricky. Your goldfish will probably recover if it suffered minor ammonia burns. But if you leave your goldfish in a highly toxic environment for too long, it will still recover, but the black spots may remain forever.

How Do I Treat Ammonia Burn?

In cases of light ammonia poisoning, the fish will heal itself. You just have to provide proper conditions so that it can go through a successful recovery.

When ammonia poisoning is more severe, you will have to move your goldfish to a new fish tank and add proper antibiotics to the water. Still, you should consult with your veterinarian before giving any medication to your fish.

How Often Do You Feed Goldfish?