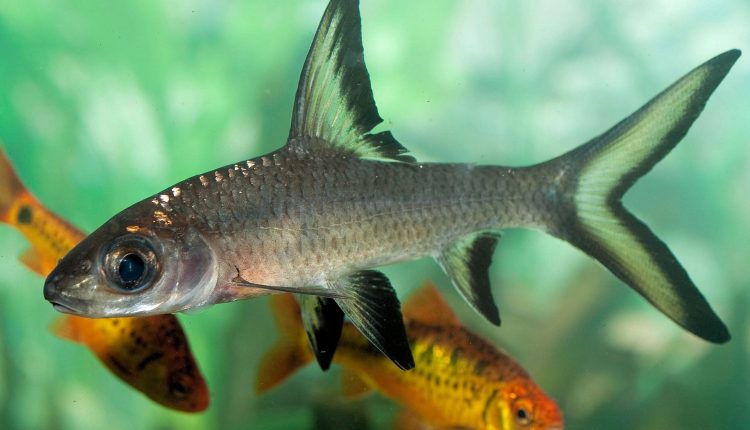 In the aquarium sector, bala sharks are one of the most popular shark species.

For their capacity to change colors based on their mood, environment, or stress level, they are also known as plankton-eating sharks or the “master of disguise.”

This blog post will cover all you need to know about maintaining Bala Sharks, including their origins, food, breeding, tank size and setup, and care suggestions, among other things. 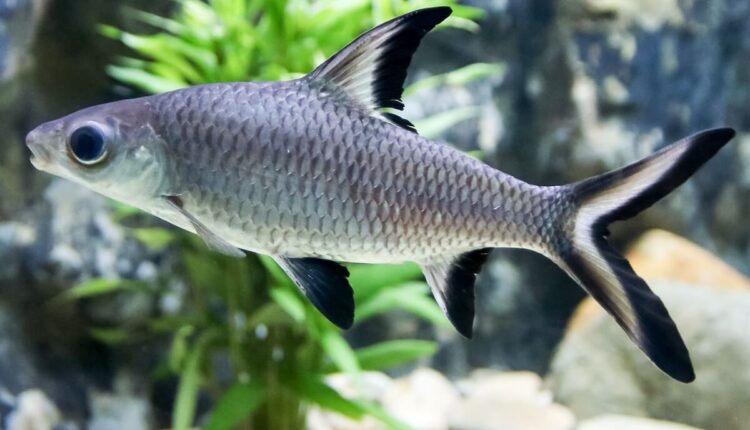 Although their name conjures up images of sharks, they are nothing like them.

Its name comes from the fact that it has a large dorsal fin and a body form similar to that of a shark, but that’s where the similarities end.

They are energetic fish who constantly move about the fish tank.

They are quite quiet and get along with most community fish, making them excellent tank mates for beginners!

Bala Sharks love aquariums with hidden areas where they may rest or sleep throughout the day. They are, nonetheless, capable of becoming highly energetic.

Because of their size, they can be quite greedy, so keep this in mind, especially if you keep them with other fish.

They like to swim around the surface or in the middle of the water, but don’t be shocked if they periodically dive to the bottom of your tank!

Due to their sensitivity to fast-moving currents as youngsters, bala sharks prefer regions that are slightly more motionless than other sites in their native environments (which makes sense considering how these fish usually stay).

South East Asia is home to Bala Sharks. Thailand, Vietnam, Cambodia, Borneo, Sumatra, and Malaysia are all home to them.

They have, however, been introduced into the Philippines, where they did not previously exist.

Bala sharks are found in vast, slow-moving rivers with a lot of vegetation in the wild, therefore keep that in mind when creating your aquarium’s habitat/environment.

Bala Sharks have declined dramatically in their natural habitats as a result of habitat loss, pollution from mining, and overfishing.

Bala sharks are increasingly being farmed to suit the growing demand for this stunning fish in the aquarium sector.

This indicates that they were raised in captivity, which is beneficial since it reduces pressure on wild populations.

Despite these efforts, the IUCN lists Bala Sharks as an endangered species, thus we must do everything we can to safeguard them if at all feasible!

The enormous standing dorsal fin that earned the Bala Shark its name is the most distinguishing characteristic.

Their fins are distinguished by yellowish stripes and black edges.

Their first two dorsal fins are small and generally monochromatic, and their posterior fin is usually smaller than the ventral.

From head to tail, its body is dark grey with a pattern of thin white lines going through it.

The belly of the Bala Shark is lighter in color and may have some markings.

They’re also very flat – both longitudinally and laterally – in comparison to most other species, giving them an even more ray-like appearance!

This form, on the other hand, aids Bala Sharks in swimming in narrow areas.

They have enormous eyes, which are useful for hunting and let them to focus on broad areas.

Bala Sharks are not recognized for their big size, although they may reach a maximum size of 12 inches (30 cm) in captivity. In the wild, they can reach a size of 14 inches.

When it comes to gender variations in Bala Sharks, most individuals are inherently difficult to classify.

With a little practice, though, you’ll be able to identify the difference between a male and female Bala Shark.

During the spawning season, males grow quicker than females, while females have a rounder underbelly than males.

If housed in perfect water conditions and fed the proper nutrition, the Bala Shark can survive for up to a decade or even longer.

Bala Sharks are typically calm fish, and they should be paired with other peaceful species whenever possible.

Here are some suggestions for tank companions:

Smaller fish species should be avoided since the Bala Shark eats them:

If there is enough swimming room for the Bala Sharks to roam about, they can be housed in the same tank.

The suggested number of Bala Fish to keep together is four, as this will assist to reduce aggressive behavior.

Your Bala’s tank should be large and lengthy, as they are aggressive swimmers. It’s best to use a 150-gallon tank with a length of at least 5 feet.

Bala Shark is a kind of shark that lives in the Water should have a hardness of 10 to 13 dGH and a pH of 6.5 to 8. The water should be approximately 77 degrees Fahrenheit.

Because the Bala shark is a vigorous swimmer that produces more waste than other shark species, the tank environment must have strong filtration.

If you want to preserve the health of the bala sharks at its best, you should change the filter cartridge once a month.

Ammonia levels must be kept below 0 ppm.

The nitrite level should be below.25 ppm, and the acidity of the water should be between 6.5-8.

Nitrate levels should be kept at 20ppm or even lower if feasible.

All you need to offer them is a simple freshwater light, which won’t set you back much money. Your fish will be thrilled if you leave it on for a third of the day (or eight hours).

As children, they require a large number of hiding places. For a stunning show, use masses of bogwood or driftwood, as well as small rock formations.

Plants are also beneficial in your tank since they help with oxygen and ammonia elimination.

Because Bala sharks are omnivores, you’ll need to pick your plants carefully.

Here are a few nice plants to consider:

If you leave the bottom bare for easier cleaning, a dark-colored substrate will emphasize their tones. The bottom of your aquarium may be decorated with aquatic dirt, sand, or gravel.

For your 150-gallon tank, a canister filter is the best solution. This type of filter is more effective than power filters or sumps at removing chemical, biological, and waste toxins.

Having the following items on hand is also a good idea:

Bala sharks are a simple fish to feed and will take a wide variety of items, including live meals like:

To help them reach their full potential, feed them a high-quality dry food like flakes or pellets as the foundation of their diet.

They also require a lot of protein due to their size. To satisfy their protein needs, shrimp or other high-protein meals can be supplemented.

They prefer to eat in small portions two or three times every day.

Additionally, crustaceans can be given to them to keep their gill filaments clean and healthy.

Bala Sharks, like other freshwater fish, are susceptible to common fish illnesses. Here are two examples:

The Bala Shark has been raised in captivity for many years and is a popular aquarium fish.

If you’re thinking about getting one of these sharks, make sure you do your homework beforehand and only buy from reliable vendors.

Additionally, before making any purchases, be aware of the tank conditions required for this species so you can give them with a perfect home as soon as they arrive!

These suggestions will assist them in living a happy existence while also extending their lives.