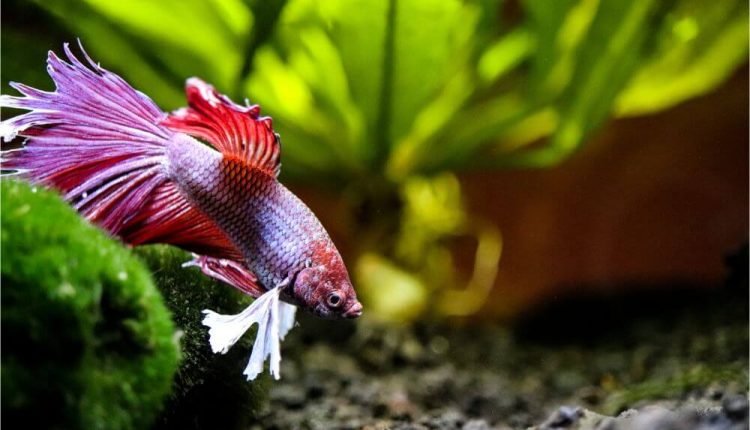 Betta fish are a stunning and attractive fish species, and they are known for their colorful fins. However, they are not considered to be friendly fish who play well with other fish. This is why they are mostly kept alone.

Nevertheless, it isn’t difficult to take care of betta fish, making them one of the most popular choices for people thinking of having an aquarium at their home.

Betta fish are also responsive and can be seen moving around when they notice you passing by their tank.

However, there may be certain scenarios in which your betta fish might not move or just lay on the bottom of the tank. It can be a cause for concern, and although they aren’t necessarily in danger, it is crucial to identify the reason for their inactive state.

So if you asking yourself why isn’t my betta fish moving, read on as we discuss this in more detail.

Let’s put your mind at ease by telling you that when the betta fish doesn’t move, even when you pass by the aquarium, it may be sleeping or resting. They often sleep numerous times during the day; there is no fixed time. Usually, betta fish wake when you pass by, but that isn’t a given.

You might be concerned about betta fish not moving because they don’t have eyelids, so you can’t tell if they are sleeping or not. Still, they sleep like humans.

If you have just gotten a betta fish, you may panic if you find them asleep. They sleep in the strangest positions – floating, resting on the filter or the heater, perched on top of rocks or plants – and sometimes with their heads in the gravel. This is why you may often think that they are dead when they are just sleeping.

At this point, don’t tap the glass or shake the aquarium, as this will shock the fish. Instead, just observe their gills and mouth for signs of movement. While you are standing there, they may sense your presence and wake up to put your mind at ease.

Here are some more reasons why your betta fish might not be responding as it usually does.

Another reason your betta fish isn’t moving could be because they aren’t comfortable in their living conditions.

Although they are pretty easy to care for, they still need the right kind of environment. They need to freely move around to grow. Some of the causes for this can be an aquarium that’s too small, poor water quality, and also the kind of fish you have put in with them.

Maintaining the right water quality is essential for all species of fish. Temperature plays a significant role when it comes to betta fish. If the temperature is too high, the fish will become hyper because their metabolism speeds up. This will cause them to move around frantically.

Moreover, lower temperatures can slow their metabolism, causing them to become sluggish and lethargic. Keep the water inside the aquarium between 77°F-86°F.

Betta fish also require adequate space to swim and shaded spots to hide and sleep in. Therefore, an aquarium over 5 gallons and having ample space after decoration is perfect for housing them.

Additionally, they also don’t bond well with all other species of fish. So you have to research which species they easily live with.

If you put your betta fish with another species that tries to dominate the aquarium, the betta will go on the offensive. Or, it might just lay in one place without any movement. Just a bit of care can ensure that your betta fish are happy in their environment.

Although the likelihood of a betta fish getting ill is low, they are susceptible to a few diseases. One disease that makes these fish lie still is swim bladder disease. This causes them to suffer from constipation, bacterial infection, or enlarged organs.

Your betta fish may have swim bladder disease if they are not swimming in a straight position. Lying on the bottom of the aquarium, completely motionless, is also a sign.

To make sure that your fish get well soon and don’t get sick again, you have to take care of the water. Moreover, make sure that you aren’t overpopulating the tank.  Feeding them a high-quality and controlled diet is also essential.

If your betta fish has swim bladder disease, increase the aquarium temperature by a few degrees and don’t give them anything to eat for up to two days. Once the fasting period has passed, feed them daphnia to treat their digestive system.

Has My Betta Fish Passed Away?

A betta fish has an average lifespan of three to five years. Only a few of them actually outlive this period. When they die, they lie on the bottom of the aquarium or float along the surface. This is similar to what they do in other scenarios. However, there is only a slight chance that they have died.

Therefore, check their gills and mouth for movement to confirm their breathing. If they are breathing, then they are simply sleeping. You can gently tap on the aquarium glass or leave your betta fish for a while to see if they wake up or start responding. If they are actually dead, then remove them from the tank and dispose of them.

These are some of the most common reasons why betta fish don’t move. So no matter how many times you find your betta fish with its head stuck in the gravel, don’t be alarmed. Consider every possibility before declaring it dead.

Whatever you do, don’t panic. Instead, check for gill and mouth movement to determine if they are breathing or not. Other than that, enjoy the time with your betta!

What Do Seahorses Eat?